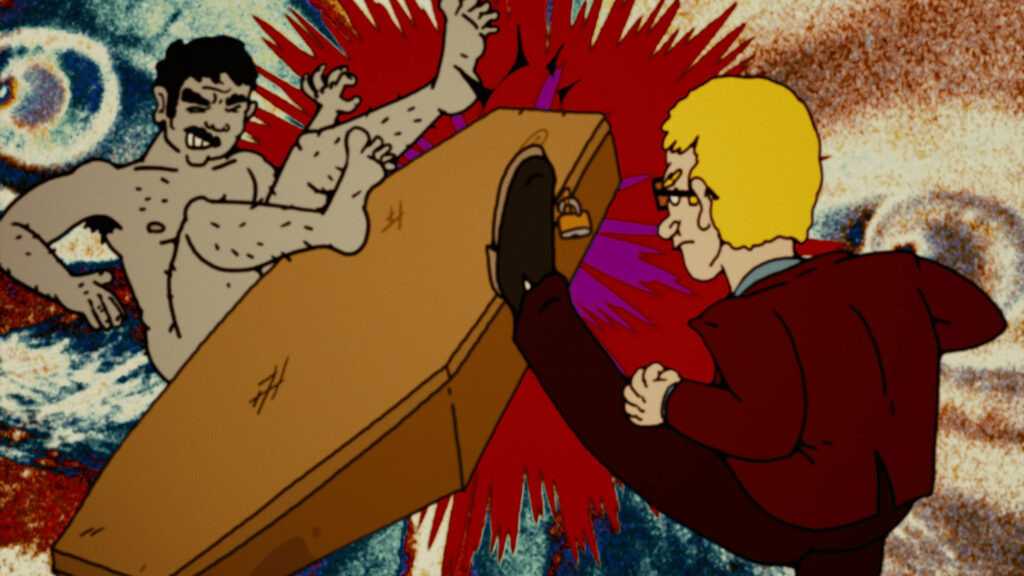 Self-improvement is a wonderful thing, and we obviously embrace the idea here at Open Culture. But corporate leadership trainings and self-help seminars can often serve to break people down rather than build them up. The cult-like mentality one finds in such environs should not surprise us: 1 in 5 business leaders have “psychopathic tendencies”; many self-help gurus actually do become — or start out as — narcissistic cult leaders. In the short film above by filmmaker Joey Izzo we see one corporate leadership training course that immediately devolved into a nightmarish scene of abuse and humiliation.

Based on an interview with Gene Church — a participant in the 1970 four-day leadership seminar in Palo Alto, California — the film mixes animation, photography, and dramatic recreations filmed in 16mm, portraying “an unconventional Mind Dynamics class where participants were forced to find a ‘moment of truth’ through a number of degrading and often violent acts,” writes Rob Munday at Short of the Week.

Participants of the men-only encounter group each paid $1000 for the privilege. All of them were distributers of a cosmetics brand called Holiday Magic, owned by William Penn Patrick, a multimillionaire John Bircher who unsuccessfully ran as a Republican for governor of California and who owned both Mind Dynamics and a corporate training company called Leadership Dynamics Institute.

Patrick offered his seminars both “for his people” and “whoever wanted to come,” says Church, and aimed to teach them “how to be successful, how to be a better husband, father, leader parent, on and on and on.” Overpromising seems to be a hallmark of fraudulent self-improvement courses, and this one was no different. What set it apart is the degree to which the participants voluntarily subjected themselves to what Church’s roommate at his hotel called “a rather rough four days.” As they would learn, the true purpose of the course was to force its students to find their “moment of truth” through various forms of beating and torture. One man was placed in a coffin, beaten severely, then locked in overnight; one was placed in a cage; one tied to a cross. These are just some of the horrors, according to the film.

Like some kind of sadistic Milgram experiment gone totally off the rails, the program enlisted all of the participants to administer beatings to each other and prevent each from leaving. And like the Milgram experiment, the Mind Dynamics seminar stands as one of many object lessons in “the perils of obedience.” There are many more examples of dark descents into cultish abuse in the self help world. Writer C.L. Taylor tells the more recent story of self-help businessman James Arthur Ray, who in 2011 was convicted of “three counts of negligent homicide when three people died during one of his ‘new age’ retreats.” These involved “sleep deprivation, fire walking, fasting, board breaking and arrow breaking,” and a sweat lodge ceremony that turned deadly.

The fact that people are often willing to relinquish their autonomy in order grow as individuals says a great deal about the amount of help people perceive they need and the degree to which human beings can be manipulated by charismatic leaders. In most cases, those leaders have no business giving advice in the first place. As one former self-help “expert,” Michelle Goodman (who found herself pushed into the arena by her publisher) admits, “the dirty little secret of those in the advice business is that we wind up teaching others the lessons we most need to learn ourselves.” Her advice to those who came to her with problems she couldn’t realistically solve: “You should really talk to a qualified professional about that.” To learn more about Church’s harrowing experience with Mind Dynamics, read his book The Pit: A Group Encounter Defiled.

Is Charles Bukowski a Self-Help Guru? Hear Five of His Brutally Honest, Yet Oddly Inspiring, Poems and Decide for Yourself

The Science of Well-Being: Take a Free Online Version of Yale University’s Most Popular Course