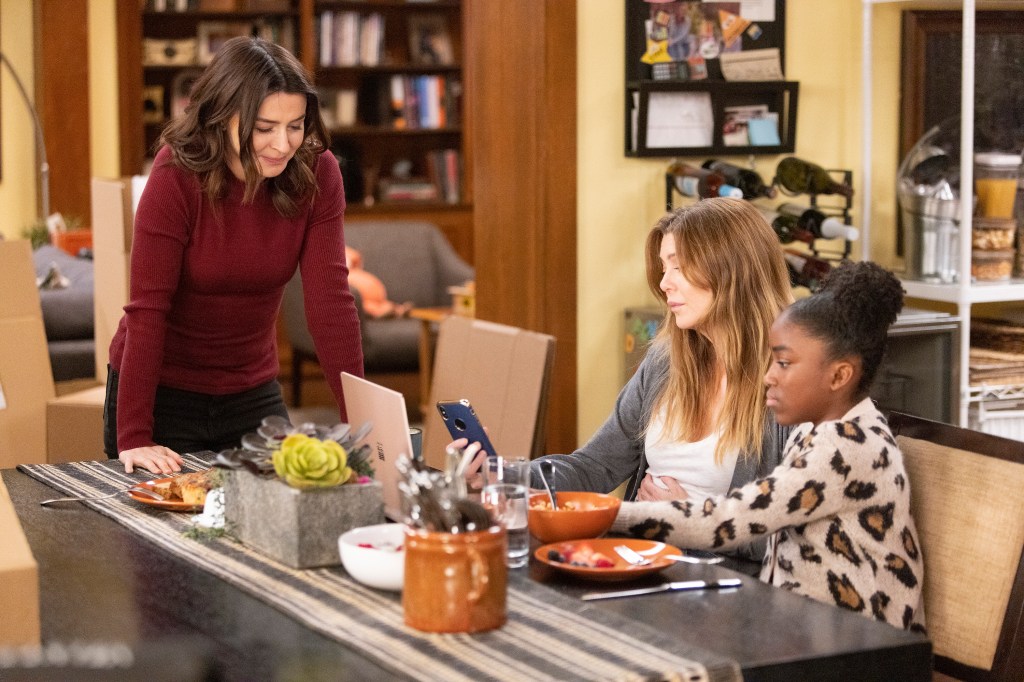 The promo for the Season 18 finale of ABC’s Grey’s Anatomy asked the question “Will she stay or go?” After a dramatic and emotional two-hour finale, we got our answer — Meredith is staying at Seattle’s Grey Sloan and not moving to Minnesota, at least for now.

But she is one of just handful of doctors still working at Grey Sloan by the end of the finale, which marked the return of Jackson and April and, fittingly for being the series’ milestone 400th episode, featured a lot of flashbacks to the early seasons with the show’s original residents, Meredith, Christina, Izzie, Alex and George.

Meredith was envisioning them in the gallery as she was performing a risky surgery, assisted by Nick, and then at the end, when Grey Slaon’s current residents were packing their stuff, with the fate of all those characters, including Levi, who is a series regular, up in the air.

Despite Bailey’s best efforts and Jackson’s charm offensive, things went from bad to worse at the hospital that day, leaving Jamarah Blake with no choice but to shut down the teaching program so the hospital can start fresh and rebuild it.

The move left Richard with nothing to do, putting his future at the hospital unclear. Moments later, Bailey quit but not before she let Owen and Teddy slip out after a man had reported Owen to her, exposing his physician assisted suicide program after Owen and Teddy refused to just give him drugs for his veteran wife to die without examining her first. In yet another major cliffhanger, Owen and Teddy were last seen on the run, flying on a plane with their kids, likely to another country.

As head of the foundation, Jackson offered Meredith to become an interim Chief Of Surgery, filling in for Bailey, which she ultimately accepted.

But an earlier conversation, in which Nick questioned Meredith’s judgement to perform the dangerous surgery amid severe blood shortage at the hospital, which ultimately led to the woman’s death, came back to haunt him. (Losing her patient also brought painful memories for Meredith, with the finale flashing back to Derek’s death.) Meredith confronted Nick at the end of the finale, telling him that he should probably go back to Minnesota. He walked out. Meredith eventually ran after him but by then he was gone, leaving that relationship — and Nick’s future on the show — very much in flux.

No cast member is known to be leaving the show at this time but the finale certainly raises a lot of questions and possibilities, making fans’ wait for the Season 19 premiere very suspenseful.

In a cliffhanger that would delight Japril fans, Jackson and April kissed in the elevator late in the finale, confirming that the exes have rekindled their relationship in Boston.

In an interview with Deadline earlier this week, Sarah Drew, who plays April, spoke about the kiss.

“It definitely leaves open the possibility that you might be checking in with them,” she said. “After the script was released, I had texts flying in from cast and crew asking if I was coming back next year because of how the episode ends. But as of now that is not on the table. It’s not something that anyone has discussed with me in any kind of official capacity. But there’s a lot of open ended questions at the end of this episode. I think you’ll leave this episode with giant question marks: Where do we go from here? How is the hospital going to recover? What is going to happen? What is the next year gonna look like? So I think there are a million questions and a million possibilities.”

Drew added that, while a full-time return is probably not feasible given her commitments, she is always game for occasional Grey’s appearances.

In other developments, Link and Winston had to make a Sophie’s choice decision between keeping Simon alive and saving his wife who went into labor. With enough blood only for one of them, Simon made the call himself, choosing to die but save his wife. He got to hold his newborn son for a few seconds before he took his last breath in one of the most emotional scenes of the finale.

Elsewhere, Amelia apologized to Link for breaking his heart and then reunited with Kai, Link and Jo rekindled their friendship after Jo broke up with Todd, Maggie questioned whether she and Winston did not marry too quickly without getting to know each other well but he later largely erased her doubts with an emotional speech, and Catherine got good news about her cancer prognosis.

“My mind is blown. All of our minds are blown,” Grey’s Anatomy showrunner Krista Verfnoff said about presiding over the drama’s milestone episode earlier this week. “It means so much to us that the show means so much to so many people in the world. The 400th episode is dramatic! We were lucky enough to have the 400th episode fall on the season finale so we pulled out all the stops.”