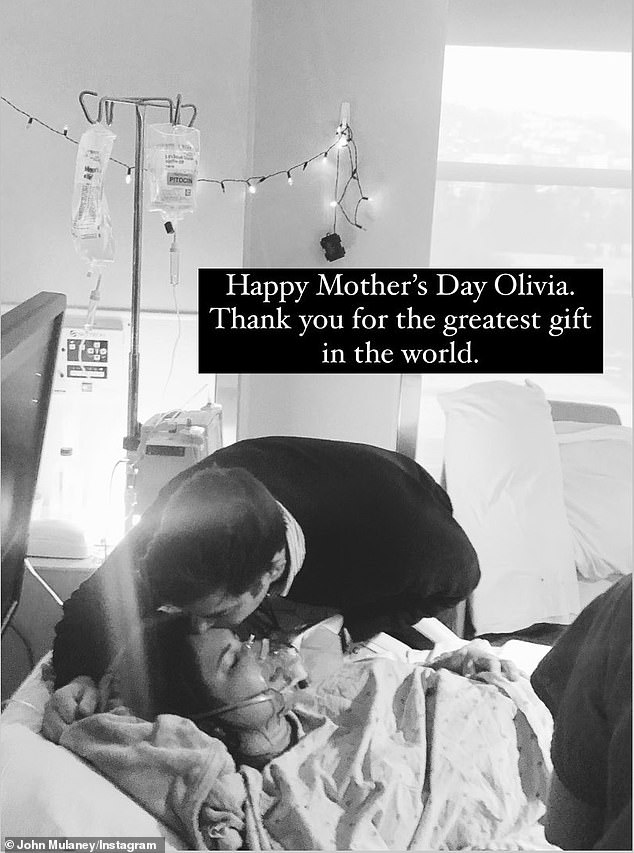 John Mulaney is paying tribute to the lady in his life, Olivia Munn, on her first Mother’s Day since becoming a new mom.

The comedian sent her a couple of sweet sentiments, via Instagram, which included a black-and-white photo of the day Munn gave birth to their now five-month-old son Malcolm.

‘Happy Mother’s Day Olivia. Thank you for the greatest gift in the world,’ he captioned the picture, that shows him giving his ladylove a kiss on the forehead as she laid in bed with an oxygen mask over her mouth.

Sweet sentiments: John Mulaney paid tribute to his ladylove, Olivia Munn, on her first Mother’s Day since welcoming their son to the world in late November

Munn, 41, wasted little time in responding to her man’s tribute by sharing the same photo and thanking him for bringing a little holiday cheer to her hospital room.

‘Thanks for putting up Christmas lights to make it festive when we welcomed out little guy,’ she wrote, along with three red heart emojis.

The Mother’s Day love notes didn’t end there for Munn.

Mulaney, 39, also posted a color photo of himself laying beside Malcolm, along with a message he attributed to their boy, who looked adorable in a yellow baseball cap, to go along with his white and gray outfit.

‘Malcolm loves you so much,’ the grateful new papa shared. ‘He told me. Last week.’ 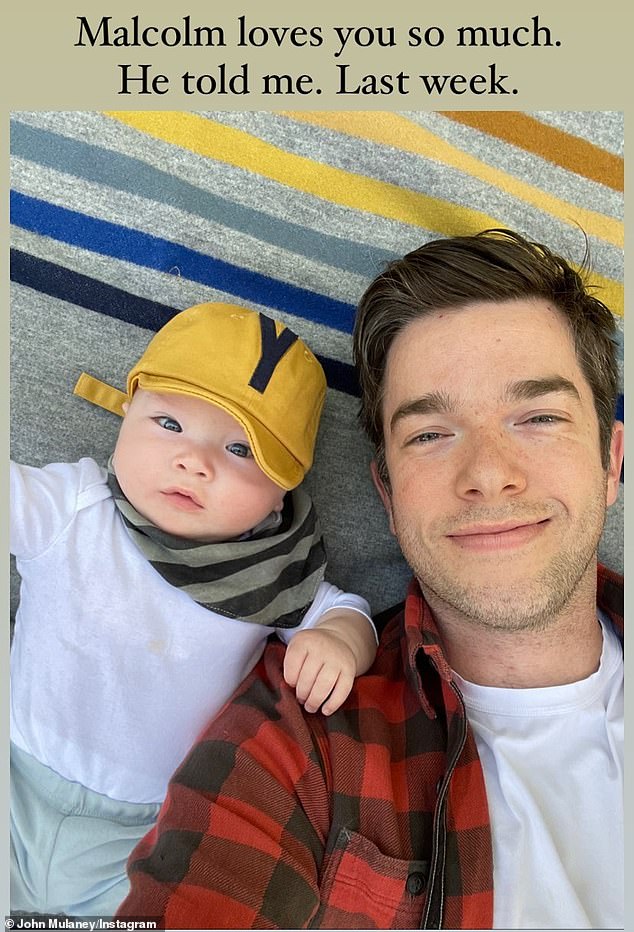 Mother’s Day tribute: Mulaney, 39, also posted a photo of himself and their son and wrote how ‘Malcolm loves you so much’ and that he told him last week 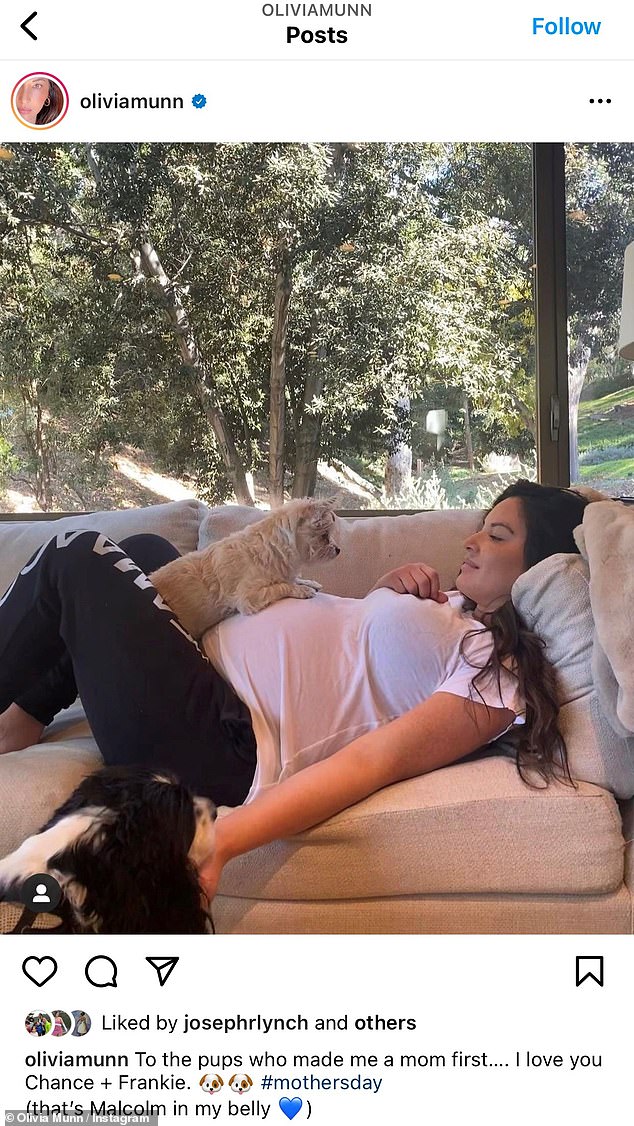 Mother’s Day thanks to pups: Munn, 41, paid tribute to her two pet pooches for making her a mom before her son Malcolm made his arrival to Planet Earth

Munn would also take time out to wish all the moms of the world a happy Mother’s Day in several photos.

The Iron Man 2 star also informed her 2.8 million Instagram fans and followers that she was actually a mother in the years before Malcolm arrived on Planet Earth.

‘To the pups who made me a mom first…. I love you Chance + Frankie. #mothersday (that’s Malcolm in my belly),’ she captioned a photo of herself, pregnant with her son, as her two pet pooches looked on.

And being the good and attentive daughter, Munn took time out to honor her own mother.

‘Happy Mother’s Day to my mom. The Original Tiger Mom,’ she gushed in a photo showing her mom cradling Malcolm in her arms. 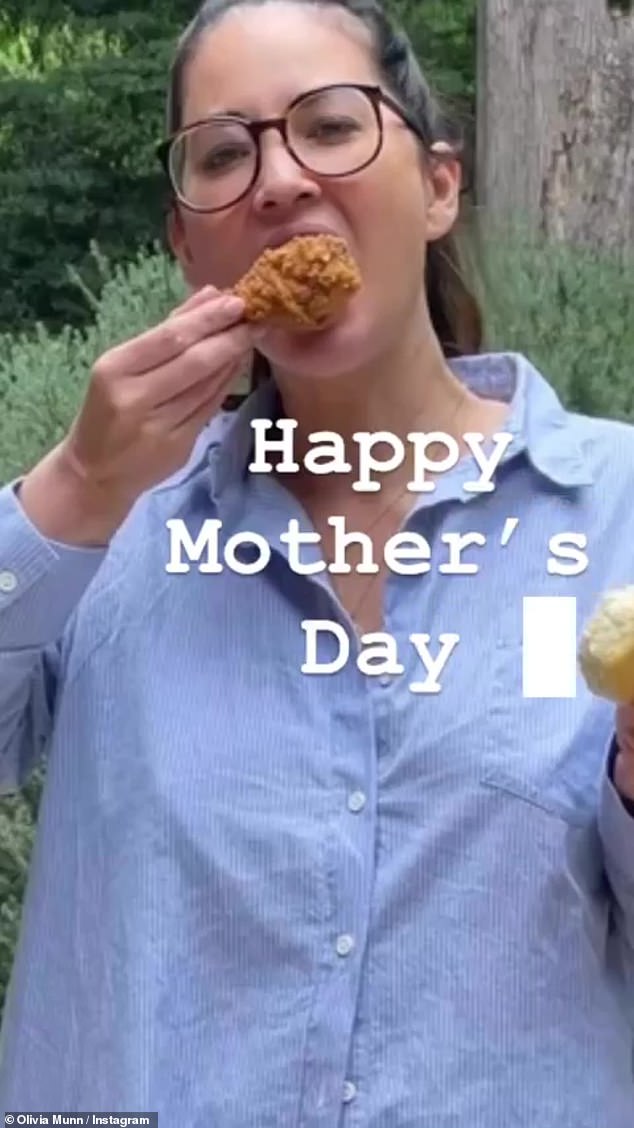 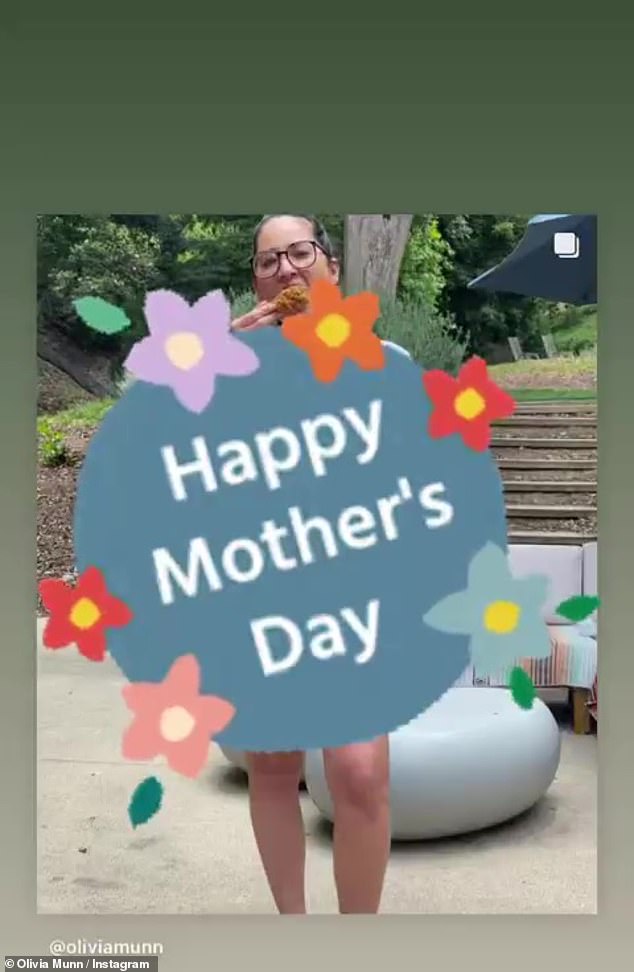 Tasty: The actress held on to biscuit as she ate a drumstick in another mom’s day post 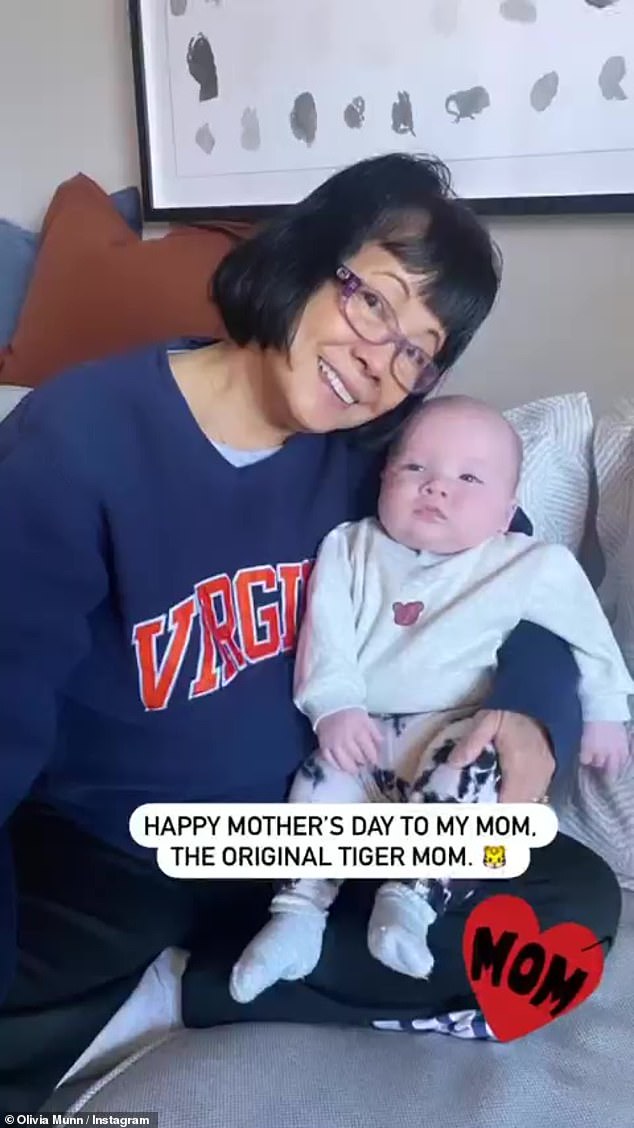 Attentive daughter: Munn took time out to honor her own mother on the holiday

Mulaney’s tribute to Munn comes less than one day after he became the first headlining comedian to hit the stage of the Hollywood Bowl in the wake of the attack on Dave Chappelle.

After a couple of opening acts, Mulaney delivered his brand of stand-up comedy on Saturday, without incident, amid heightened security and new safety measures.

As part of the beefed up security, a wood panel that had lined the front row and the stage of the venue was replaced by a fence. Plus, there were about 10 officers lining the stage area from down below, in addition to the other guards that were positioned on the second level, as well as off to the sides, according to TMZ.

And those new measures were on top of the audience, who all had to go through metal detectors and have their bags checked, which was a part of the norm in the past. 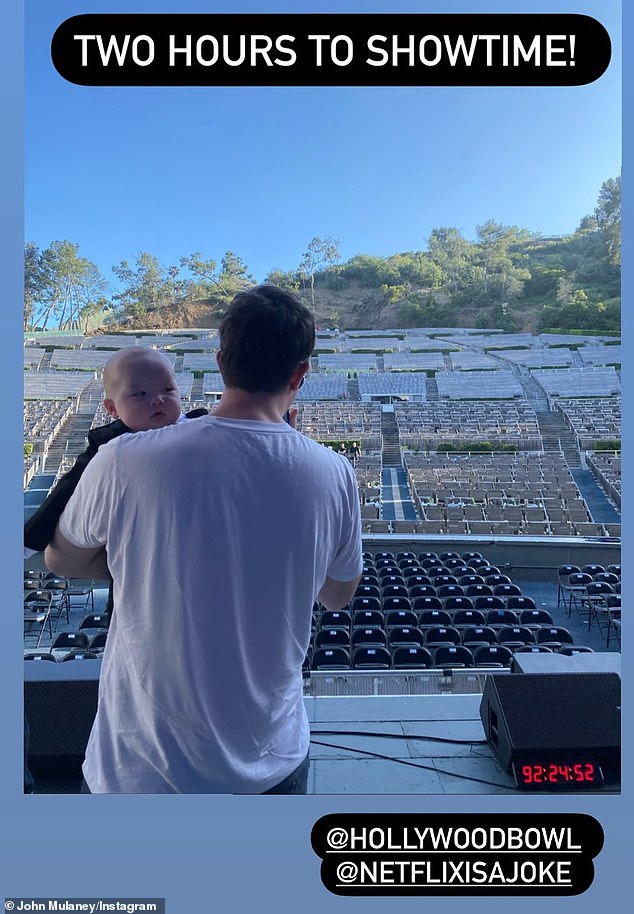 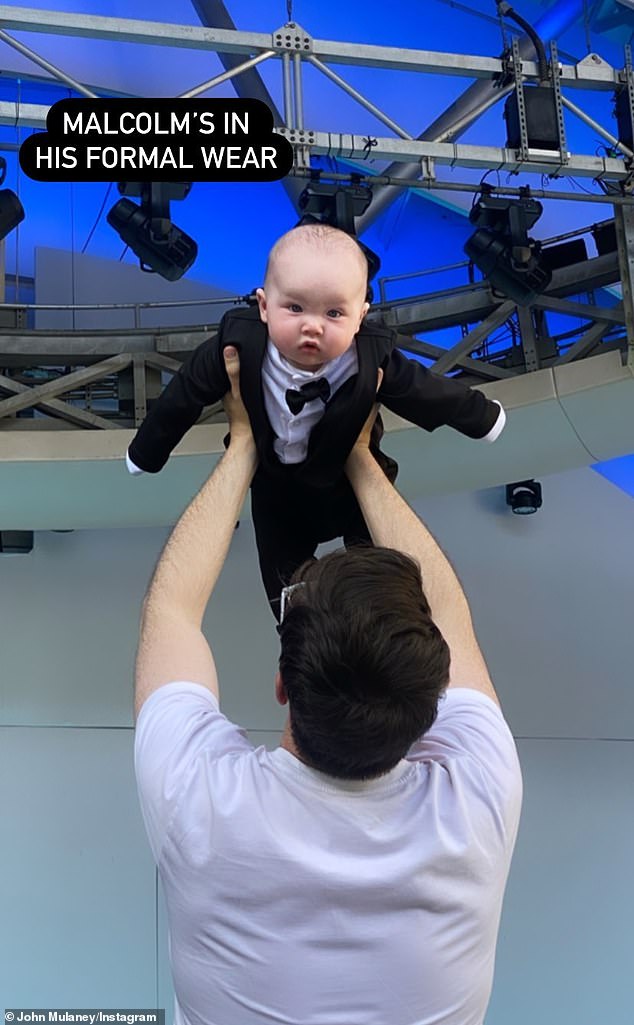 ‘Formal wear”: Malcolm was decked out in a classic black tuxedo and bow tie 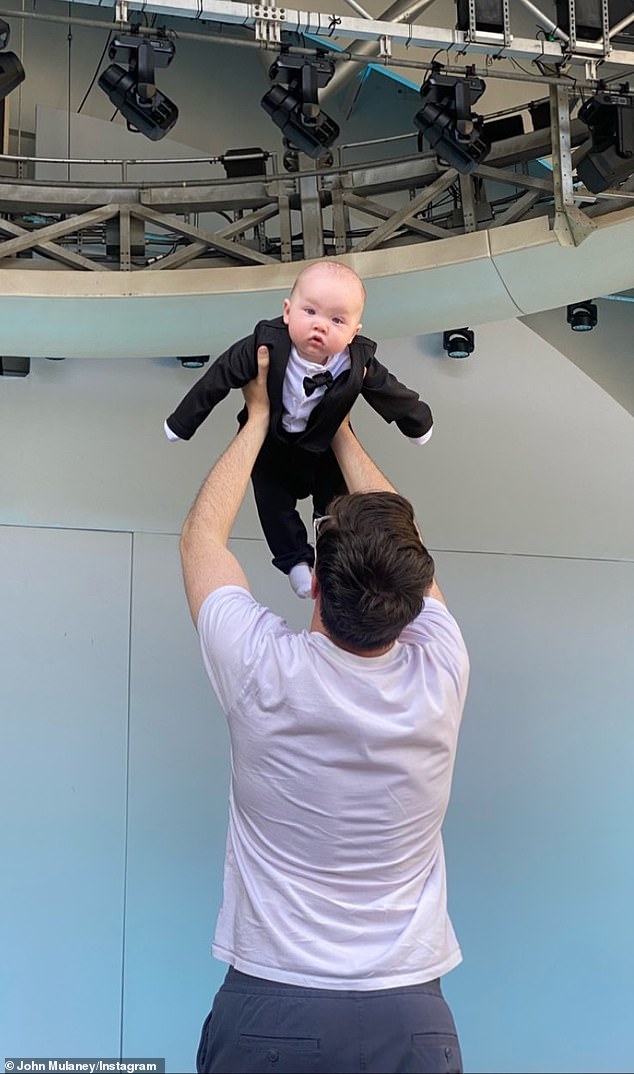 Giddy: Mulaney could be seen lifting his son into the air in a few pictures

During his show, Mulaney made light of the Chappelle incident without mentioning his name, joking how the venue has ‘great security’, and how the fence is ‘so jumpable it’s crazy,’ according to The Hollywood Reporter.

After sharing how he could ‘clear the fence’ even with his ‘bad hips’, he proceeded to issue a mock challenge to the audience: ‘No one’s going to do anything. You don’t have the balls.’

Four days earlier, a man rushed the stage and tackled Chappelle just as he was finishing his stand-up show. Police have since reported that the man pointed a replica handgun at him before being taken into custody by security.

With all the extra security for his show, Mulaney felt comfortable enough to bring his son Malcolm to the famed venue when he was doing his sound check about two hours before showtime. 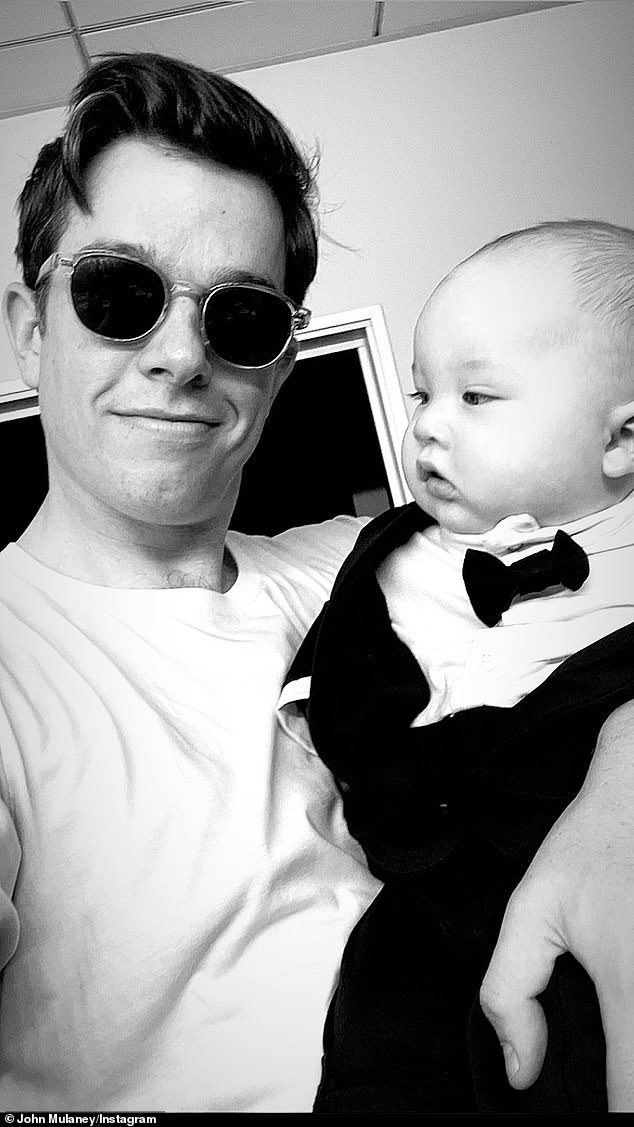 Showtime: Mulaney was the first headlining comedian to take to the Hollywood Bowl stage in the wake of the attack on Dave Chappellee; during his act, he made light of the Chappelle incident without mentioning his name 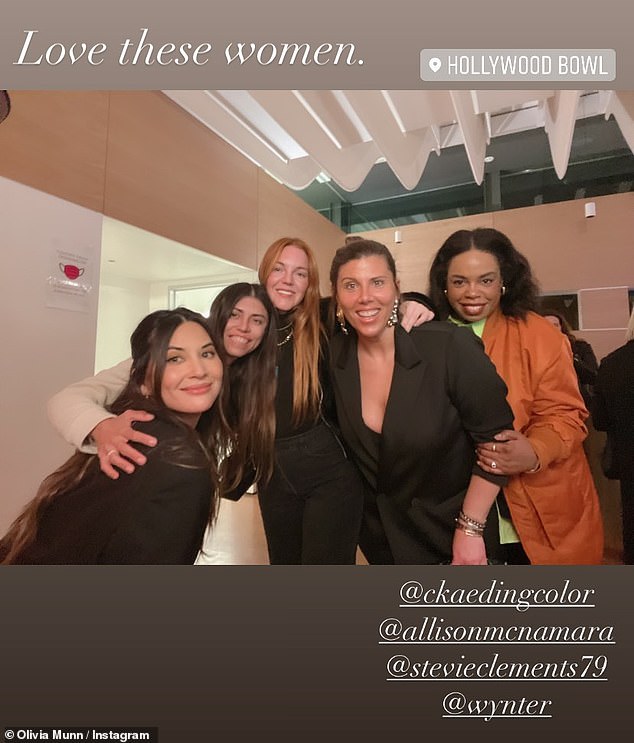 Supportive: Munn and several of her gal pals were on hand for Mulaney’s stand-up show on Saturday at the Hollywood Bowl 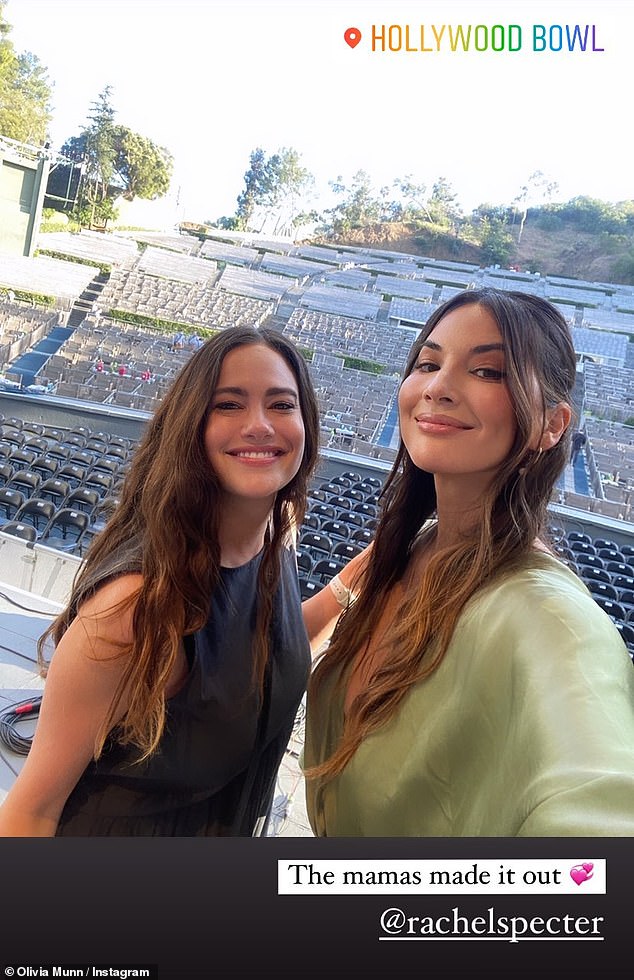 Moms honored: Munn made light that ‘the mamas made it out’ to her man’s show 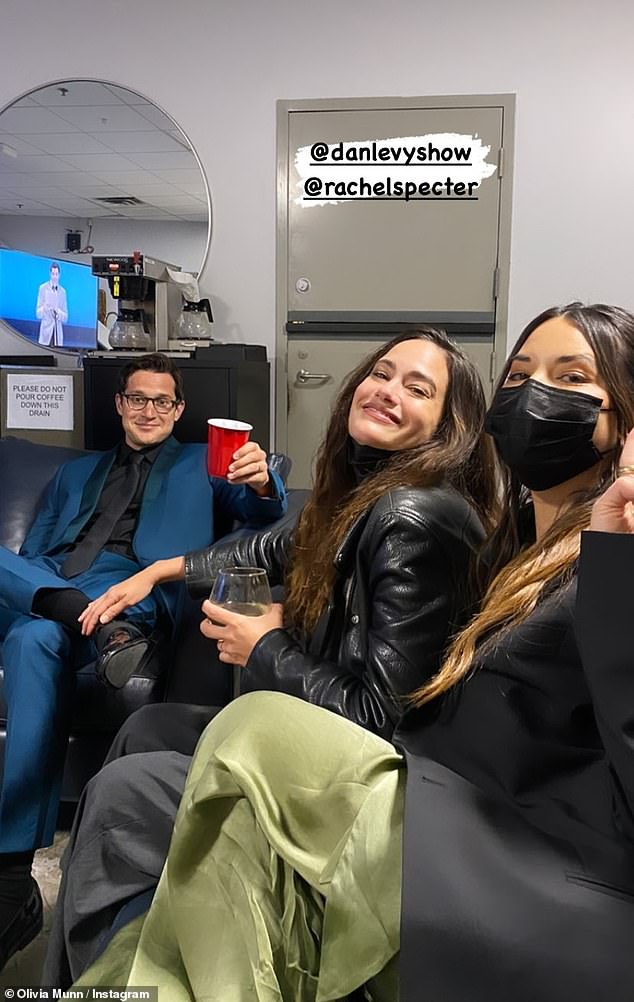 BTS: The Newsroom actress also shared images from backstage in a dressing room 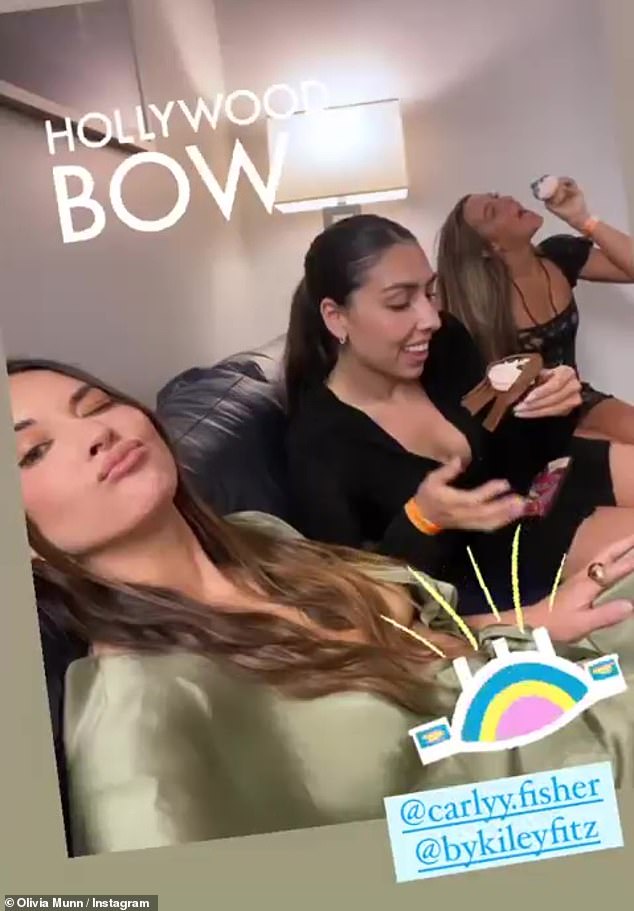 Chillin’: The ladies enjoyed some drinks and snacks while relaxing in a dressing room

Decked out in a black tuxedo and bowtie, the proud father wrote how ‘Malcolm’s in his formal wear’ inside a photo of him lifting his boy up towards the stage lights.

Munn was on hand for her man’s show, and to look after their son, which she documented with a slew of Instagram photos that were taken backstage and in the dressing room with several of her friends.

The suspect in the Chappelle attack, 23-year-old Isaiah Lee, was charged with four misdemeanors.

On Friday, he entered not guilty pleas to those charges that included battery, possessing a deadly weapon with intent to assault, unlawfully crossing from a spectator area onto a stage at a theatrical event, and interfering with or delaying such an event with unlawful conduct. 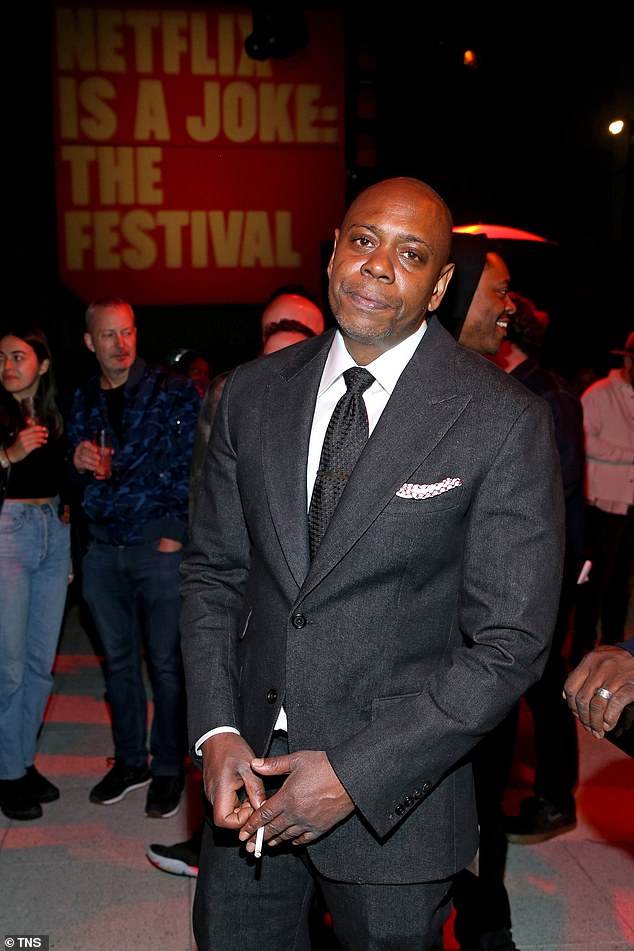 The onstage attack: Four days earlier, a man rushed the Hollywood Bowl stage and tackled Dave Chappelle just as he was finishing his stand-up show

The suspect detained: The suspect in the Chappelle attack, 23-year-old Isaiah Lee, pleaded not guilty to four misdemeanor charges on Friday