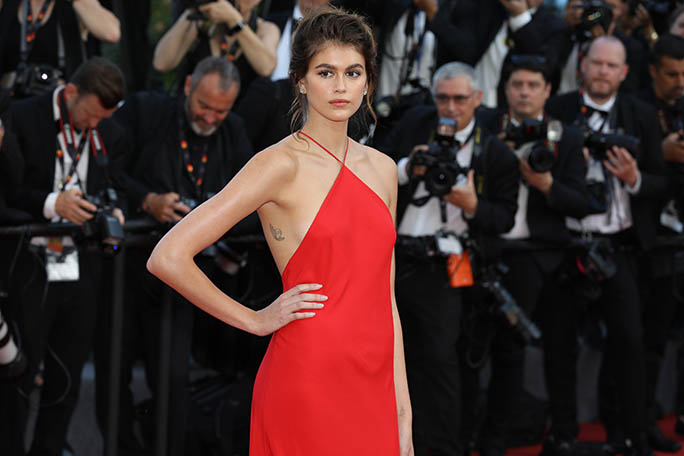 Celebrities are pulling out all the stops for their looks during the 75th annual Cannes Film Festival. While we’ve seen a variation of form-fitting black gowns and embellished numbers, Kaia Gerber switched things up by today showcasing her take on the red statement dress.

The model attended the “Elvis” premiere to support her boyfriend Austin Butler, who plays Elvis in the new film. Gerber wore a red halter neck dress that had thin spaghetti straps and a delicate train that swept the floor as she walked.

The daughter of Cindy Crawford and Rande Gerber styled her hair in a romantic updo and let a few strands frame her face. To keep things simple, she accessorized with diamond stud earrings and a fresh no makeup look.

Completing her look was pair of black strappy sandals. The silhouette peeked out under her gown and featured a strap that ran across the toe and around the instep. Gerber wears pointed-toe pumps and sandals in similar shades, as well as metallic tones, by Christian Louboutin, Gianvito Rossi and Jimmy Choo at formal events.

Pop on a pair of black sandals for a refined appearance.