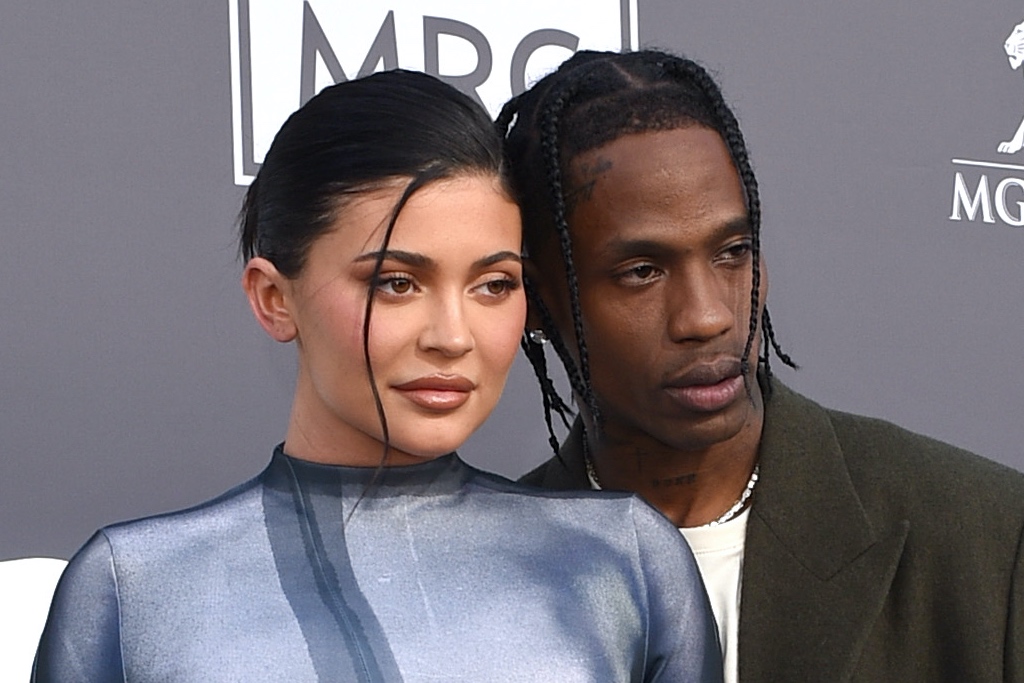 Jenner hit the red carpet in a navy blue bodycon gown. Designed by Olivier Rousteing, the piece featured an extremely slim fit with a slightly mock-neck silhouette and back skirt slit. Giving it a sultry edge was an ombré light blue nude figure printed on the gown’s front, giving its wearer a sultry edge. The piece also featured two thin lines with mixed tones to give the impression of patched fabric. Jenner’s look was finished with two large gold cuffs accented with chunky sculpted chains.

Scott’s look was more tonal, featuring a dark green jacket and trousers over a white T-shirt and Nike sneakers.

When it came to footwear, the Kylie Beauty mogul’s shoes were not visible beneath her gown’s long hem while standing. However, she paired the slick ensemble with metallic gold Ultima heels by Balmain, which included buckled ankle straps. The $1,595 style’s greatest statement came from its curved resin heels, which totaled 4 inches in height and were sculpted to look like chain links.

The Billboard Music Awards are back in Las Vegas, celebrating music’s biggest stars and Diddy is taking the stage as host. The BBMAs will be held at the MGM Grand Garden Arena and will be broadcast at 8 p.m. ET on NBC, in addition to streaming live on Peacock.

Discover more star arrivals at the Billboard Music Awards 2022 in the gallery.