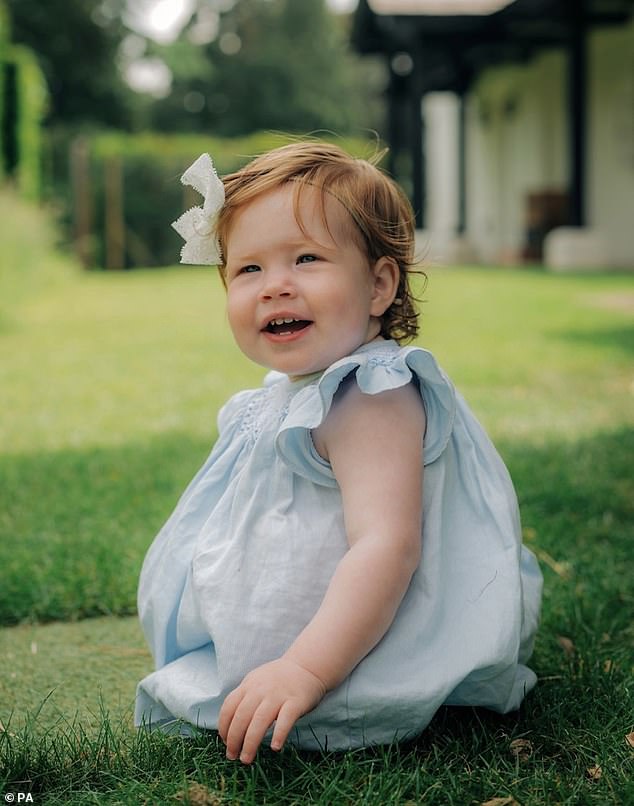 Harry and Meghan’s daughter was photographed in the £95 frilly top and matching bloomer set from Amaia, one of the Duke and Duchess of Cambridge’s favourite children’s brands.

Indeed Lilibet’s cousins Charlotte, seven, and Louis, four, wore the designer on a total of four occasions over the Platinum Jubilee weekend.

It could have been a gift from uncle William, 39, and auntie Kate, 40, to mark the little one’s big day, although the Cambridges are understood to have not attended the garden birthday party. 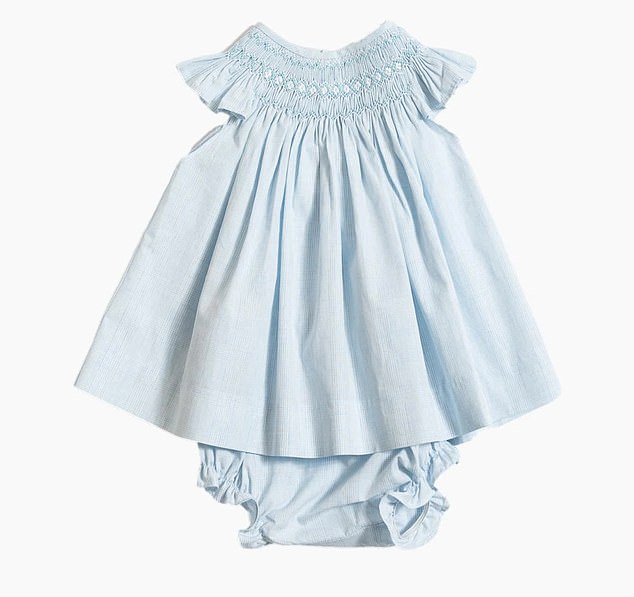 Pretty as a picture: Harry and Meghan’s daughter was photographed in the £95 frilly top and matching bloomers set from Amaia, one of William and Kate’s favourite children’s brands 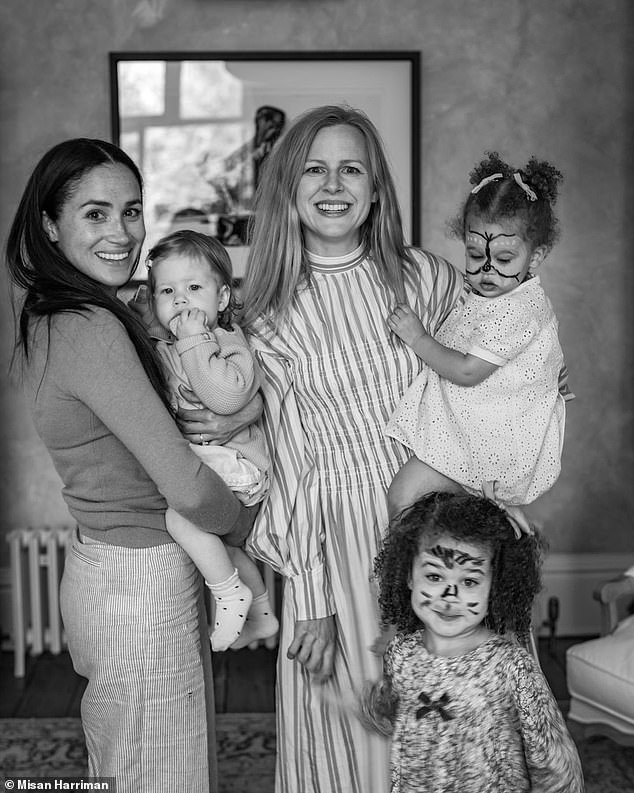 Family fun! In this picture Lilibet is seen in her mother Meghan’s arms beside photographer Misan Harriman’s family which includes his wife Camilla Holmstroem

The Angel Set from Amaia is made up of a frilled top with hand smoking at the collar, and a matching bloomer with elasticated legs.

It is described by the brand as a ‘chic, delicate and beautiful new style to welcome the awakening season ahead’.

Harry and Meghan hosted a ‘relaxed’ picnic on Saturday for little Lilibet in the Windsor estate with birthday cake, balloons, party games and picnic snacks, it has been reported.

Among the guests are thought to have been Zara and Mike Tindall and their three children, Mia, eight, Lena, three, and Lucas, one, as well as Peter Phillips and his daughters Savannah, 11, and Isla, 10. 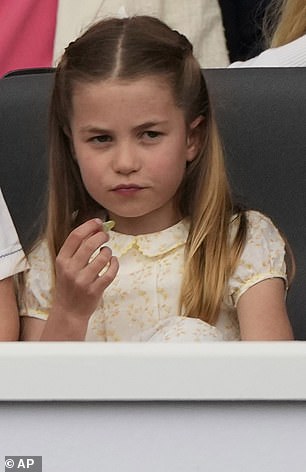 Go-to brand! Princess Charlotte in a £105 yellow Amaia dress (left) and £140 coat (right) at the Platinum Pageant on Sunday 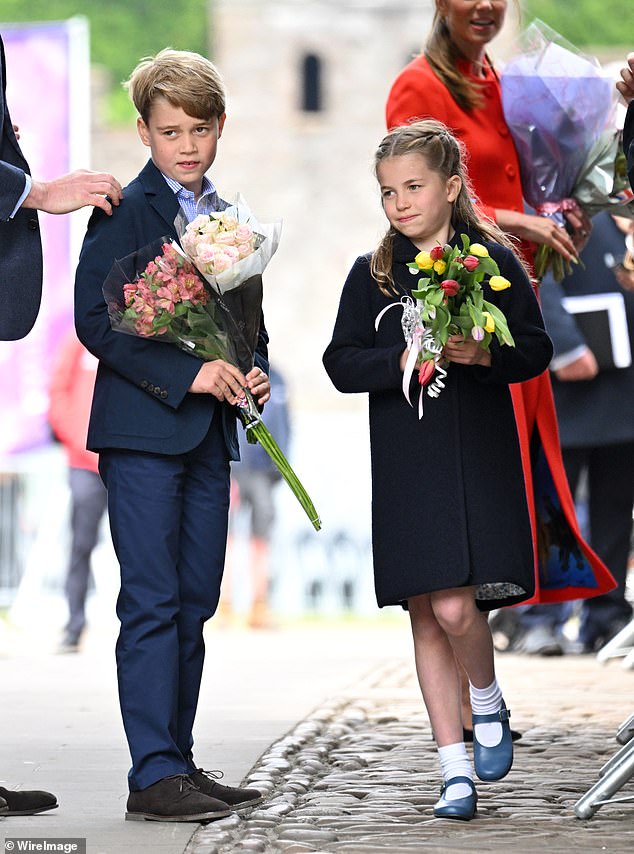 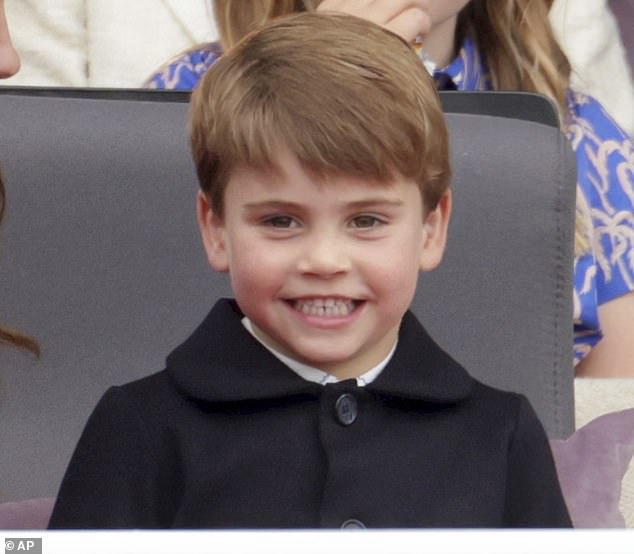 Three-year-old Archie’s godfather, Charlie Van Straubenzee, and his brother Tom, godfather to Princess Charlotte, were also invited, it is understood.

The Queen was also said to have met her namesake on Thursday or Friday during the Platinum Jubilee festivities, although she reportedly banned a photographer from capturing the moment.

Yesterday, the couple’s wedding baker Claire Ptak, who runs London-based Violet Cakes, shared a photograph of a pretty pink cake topped with flowers and frosting that royal fans have speculated might have been created for Lili. 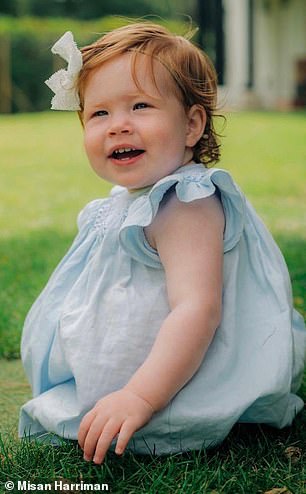 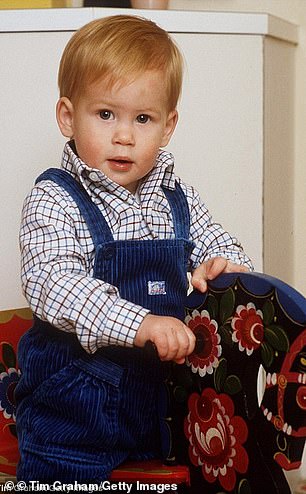 Daddy’s double: In a photograph of Harry at a similar age, also one, he is seen with his trademark reddish locks, similar to Lilibet now, and wearing a blue dungaree and shirt 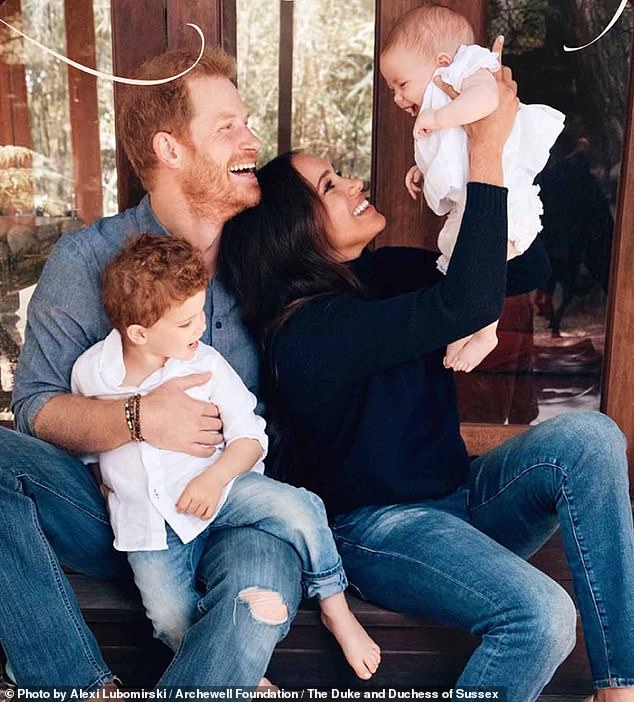 Harry and Meghan celebrated their daughter Lilibet’s first birthday in Windsor yesterday with a ‘relaxed’ birthday party —with royal second cousins invited to the festivities. Pictured, the couple with children Archie and Lilibet

She shared a second photograph this morning with the caption ‘Frilly’.

For the couple’s wedding day, Claire made a lemon and elderflower flavor cake, served in four parts.

This is the second official picture of Lilibet after the Duke and Duchess of Sussex released a Christmas card on December 23. 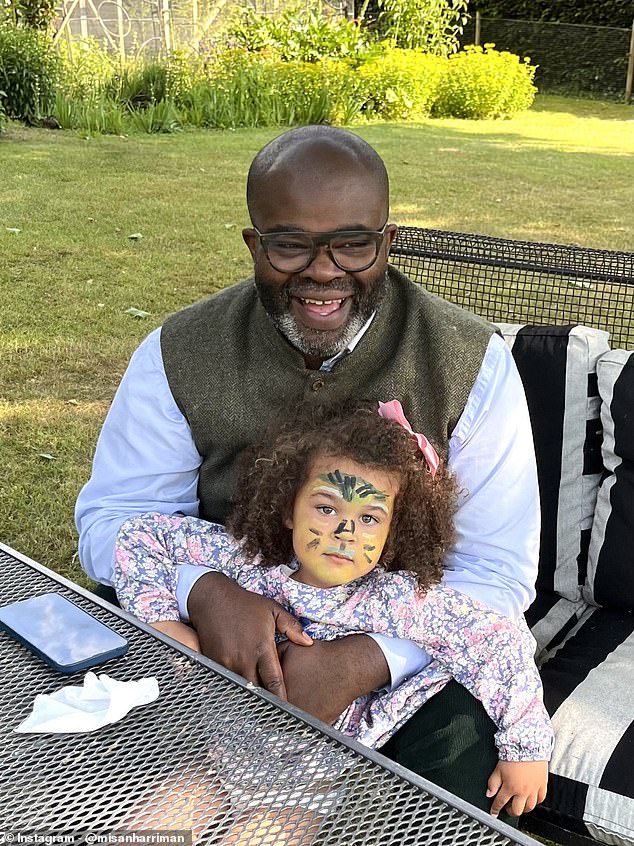 Misan Harriman, Lilibet’s photographer, with one of his children in face paint in a garden

Prince Harry and Meghan Markle left the Platinum Jubilee early – missing the Pageant and the Queen on the balcony on Sunday – as they flew back in a private jet to California with luggage that appeared to include a wooden swing set which looked similar to the one gifted to William and Kate by Prince Charles.

Photographer Mr Harriman wrote on her Twitter: ‘It was such a privilege to celebrate the first birthday of Lilibet with my family and hers! Joy and face painting all around.’

Twitter royal commentator and friend of the Sussexes Omid Scobie said the couple invited close friends and family for an ‘intimate backyard picnic’ as he posted the picture.

So just when HAVE Harry and Meghan shared a glimpse of Archie and Lilibet with desperate royal fans?

8 May 2019 – Prince Harry and Meghan Markle appear in photo-call for Archie at Windsor Castle.

When asked to expose more of their baby’s face to the cameras, the Duchess laughed as Harry joked: ‘He’s already got a little bit of facial hair as well, wonderful.’

6 July 2019 – Meghan and Harry hold private christening for Archie and release two images of the event on Sussex Royal. It offers royal fans their first real glimpse at Archie

24 December 2019 – Meghan and Harry release their holiday card for the year, with their son taking centre stage in the black-and-white snap

8 March 2021 – Archie appears briefly in Meghan and Harry’s Oprah Winfrey interview as he runs along beach, but his face is barely visible

21 May 2021 – Archie, from behind, appears on swings with Prince Harry in The Me You You Can’t See documentary

6 June 2021 – Meghan releases her children’s book the bench, in which both her children are illustrated

7 June 2021 – Meghan and Harry announce their daughter Lilibet has been born, but do not release any photographs

4 August 2021 – Meghan releases video to mark her 40th birthday, in which there appears to be a blurry image of Harry kissing a newborn in the background, thought to be Lilibet. There are also several blurry images of Archie.

23 December 2021 – The Duke and Duchess share an image of their family, including Archie and Lilibet, in which their faces are all visible to the camera

6 June 2022 –  The Duke and Duchess of Sussex released a new picture of Lilibet on her first birthday at Frogmore Cottage during the Platinum Jubilee. A second image was also shared by photographer Misan Harriman in which his family is pictured alongside Lilibet in Meghan’s arms

Mr Scobie added that Harry and Meghan’s wedding baker Claire Ptak made a special order for the party.

And was told by a spokesperson for the couple that they ‘remain incredibly touched by the countless birthday wishes for their daughter’ and have also been ‘amazed’ to learn that $100K (£79,000) was donated in Lilibet’s honour.

The funds went to World Central Kitchen, a not-for-profit organisation partnered with the couple’s Archewell foundation, according to a spokesperson for the Sussexes.

The organisation has provided support in Uvalde, Texas and Ukraine, the spokesperson said.

A spokesperson for the couple did not name specific family members who attended the event.

A source spoke to The Sun, about the party, saying: ‘It was a lovely do and had everything you’d expect from a child’s birthday party.

‘The idea was for it to be very relaxed and casual, with people free to pop in and out as they wished.’

They said that it was a ‘nice opportunity’ for some of the royal children to meet little Lilibet, with this trip being her first time in the UK.

They added that ‘lots of discussion’ had been had about the best gifts for the ‘milestone’ birthday, with a ‘£75 pink Volkswagen Beetle ride-on toy’ proving a popular idea.

It’s unclear whether the Duke and Duchess of Cambridge, or Prince Charles were able to attend Lilbet’s birthday in Windsor but were reportedly not there.

However Lili’s grandfather and aunt and uncle did share their well-wishes on social media, in a public show of support.

The words posted on the Prince of Wales and Duchess of Cornwall’s social media read: ‘Wishing Lilibet a very happy 1st birthday today’ along with a cake emoji.

It is also very likely that Prince Charles met his grandchildren. It is understood that he and Camilla met Harry and Meghan privately.

It comes after George Northwood, the Duchess’ hairdresser, who recently jetted out to the Netherlands to do Meghan’s beauty while she attended the Invictus Games with husband, shared a post on Instagram with several images of the Duchess.

In a gushing caption, he posted: ‘So nostalgic and wonderful to be reunited Harry, Meghan and their family in the UK. Archie has grown to be the cutest, well mannered little boy and Lilibet is just beautiful.’

The Duke and Duchess of Sussex were seen landing in California laden with luggage.

The couple appear to have come home with presents from their family.

A member of their team was seen carrying a wooden swing with rope coming out of it and covered by a blue wrapping as Harry and Meghan’s team loaded their luggage from Santa Barbara Airport as their private jet touched down on Sunday evening.

Another assistant was seen reaching for a blue scooter that was sitting on top of a suitcase to put it into an SUV which further indicated that Lilibet and Archie, who were not seen during the Jubilee, accompanied their parents.

During their visit to mark Her Majesty’s 70 year reign, the Duke and Duchess of Sussex were seen rarely – once was at the Trooping of the Colour and another time at St Paul’s Thanksgiving Service – and had no official role during the festivities.

The Duke and Duchess did not attend the Platinum Party and stayed in Windsor alongside the Queen to reportedly watch the concert with Her Majesty. 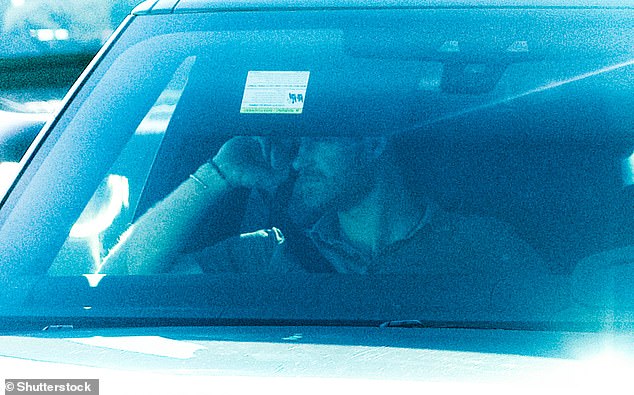 Prince Harry looking glum as him and Meghan Markle returned to California. Here he can be seen wiping his eye after their private jet trip 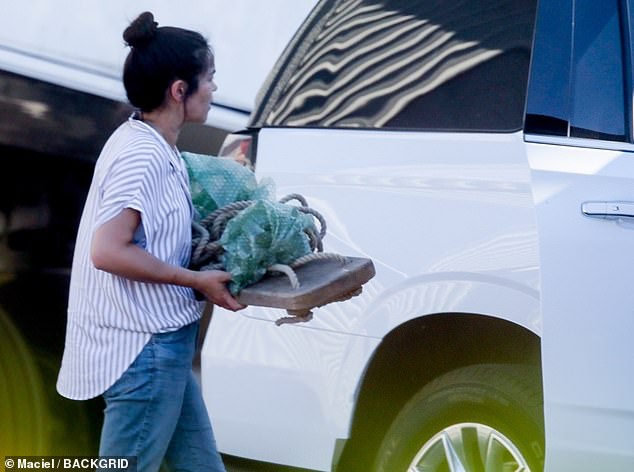 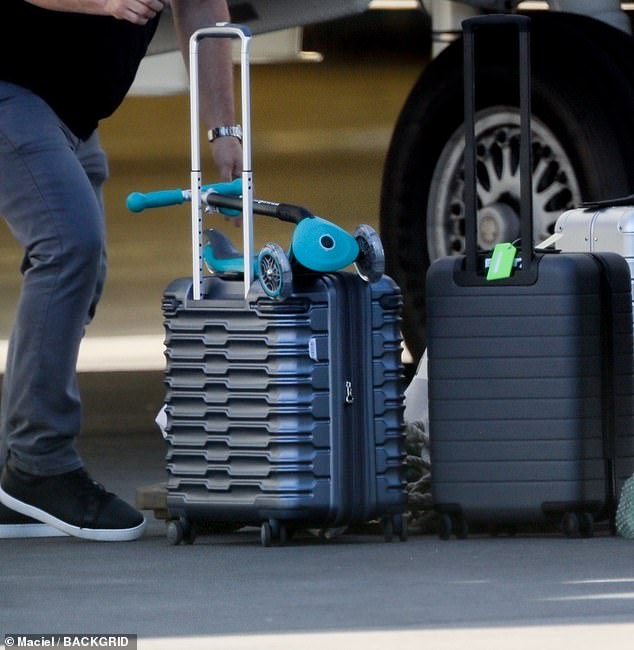 Harry and Meghan then drove, according to The Sun, to Farnborough Airport at 1.30pm, an hour before the Pageant started at 2.30pm and made their way back to California.

This was hours before the Queen – who sources say was ‘determined’ to bravely overcame her painful mobility issues – returned to Buckingham Palace to personally thank the thousands of well-wishers in the crowd who had turned out to express their own gratitude.

The Platinum Jubilee Pageant was an afternoon of entertainment for members of the royal family, who all sat together alongside their siblings and cousins.

The parade told the story of her life, and the nation, with an eccentric, fun and imaginative carnival-like display.

An insider said: ‘There was no fanfare, they just went. They didn’t stick around for the Platinum Jubilee pageant which is a celebration of Britain and all of its quirks and eccentricities over the Queen’s 70 year reign.’

Before the festivities started an aide told The Telegraph: ‘The media might try to make them prominent, but in reality they are not going to be playing a prominent role. A line has been drawn.’