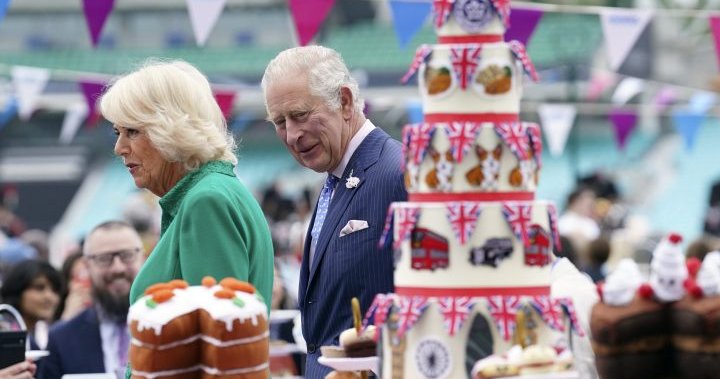 Royal fans were hoping for an appearance by Queen Elizabeth II at Buckingham Palace after a colorful street pageant through London on Sunday, the final day of a holiday weekend celebrating the monarch’s 70 years on the throne.

Thousands of performers will parade along a three-kilometer (nearly two-mile) route from Horse Guards Parade down the Mall to Buckingham Palace, telling the story of the queen’s life with dance, vibrant costumes, carnival music and giant puppets.

Cooking for the Queen: A former royal cook spills the tea on palace kitchen life

Festivities will begin with the ringing of bells at Westminster Abbey, and a military band will lead the gilded gold state coach, a horse-drawn carriage that transported the queen to her coronation 69 years ago.

The monarch won’t take part in the pageant, but archival video of her will be broadcast at the coach’s windows.

Royal fans braved the wet, chilly weather and camped out on the Mall overnight to secure the best view of the pageant. Some came for the celebrities due to perform, while others say they want to be part of a historical moment.

“It’s part of history it’s never going to happen again. It’s something special, so if you are going to do it you’ve got to go big or go home,” said Shaun Wallen, 50.

The queen hasn’t appeared in public for the Platinum Jubilee events since Thursday, when she smiled and waved on Buckingham Palace’s balcony with her family. She has limited her appearances in recent months due to what the palace describes as “episodic mobility issues.”

Still, she delighted the country when she appeared in a surprise comedy video that opened a concert Saturday staged in front of Buckingham Palace. In the video, the monarch had tea with a computer animated Paddington Bear – and revealed that, just like the furry character, she was partial to marmalade sandwiches and liked to keep them in her handbag.

On Sunday, celebrities including Ed Sheeran will belt out “God Save The Queen” outside Buckingham Palace as a finale to the pageant. Many hope that the monarch will make a second balcony appearance to round off the weekend of celebrations.

Jo Kearney contributed to this report.