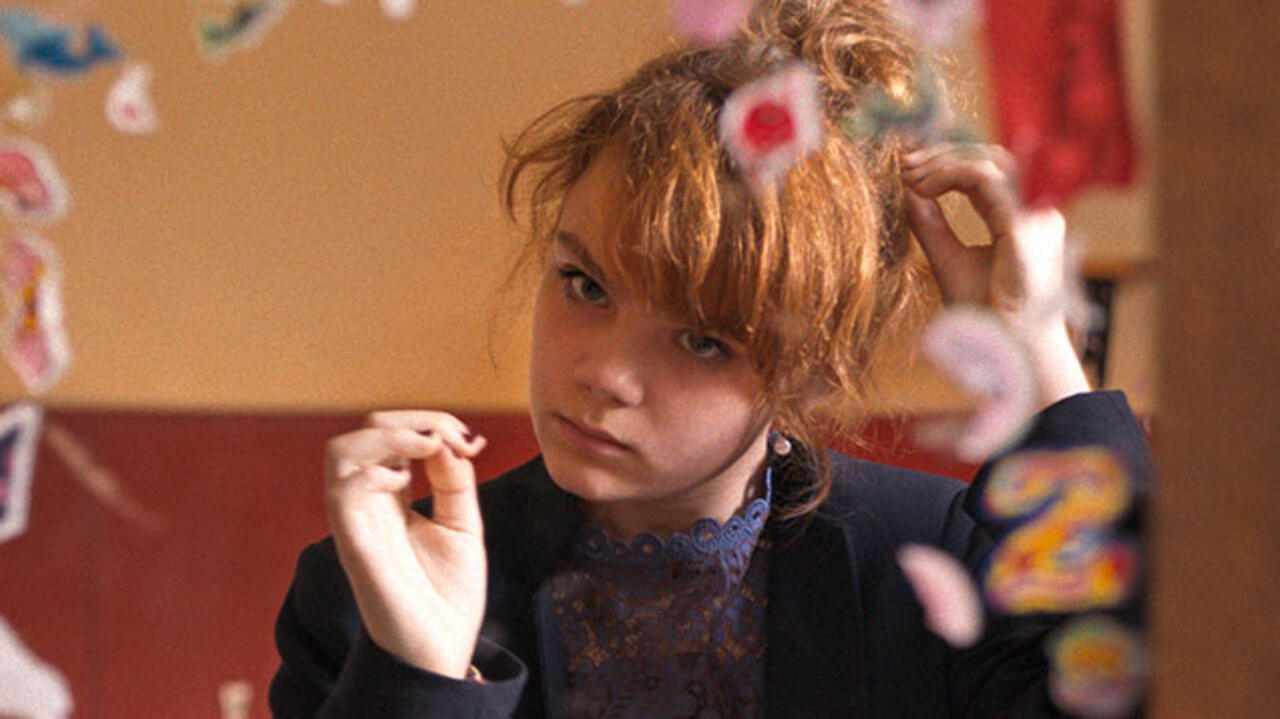 An adolescent girl slowly comes to terms with the abuse she endured from her father in Emmanuelle Nicot’s powerful debut feature, “Love According to Dalva”, which screened this week at the 75th Cannes Film Festival. FRANCE 24 spoke to the Belgian director about tackling such a delicate subject and premiering in Cannes.

Zelda Samson stars as Dalva, a feisty 12-year-old girl who dresses like a grown woman, wears makeup and does not expect to be treated like a child. We first meet her kicking and screaming as she’s taken away from her father – whom she tellingly calls by his first name rather than “papa” – and into a youth shelter. Homeschooled and hidden from the world, Dalva struggles to understand the grooming and abuse she’s endured, even as she strives to recapture the childhood she was stripped of.

Such is the starting point for Emmanuel Nicot’s first feature film, which screened at the Critics’ Week sidebar in Cannes. “Love According to Dalva” is a hard-hitting exploration of the devastating emotional scars of child abuse, approached with empathy and sensitivity. FRANCE 24 spoke to the Belgian director about navigating such tricky territory and bringing it to the big screen.

The trauma caused by incest is a particularly difficult and sensitive subject to unpack. Why did you choose it for your very first feature-length film?

The starting point was my interest in the psychological dependence experienced by victims of different types of abuse. It’s a subject that is dear to me and that I explored before in my short films. I wanted to further pursue this interest with “Dalva”.

While working on my last project I had a chance to spend time with youths at an emergency shelter, many of whom were known to have suffered abuse and yet continued to side with their families. Despite being taken into care, the youths were still under their parents’ psychological hold. I had worked before on psychological dependence within couples and among friends, but I didn’t realise just how strong it could be for children brought up in toxic families.

The idea for “Dalva” emerged after a friend told me that her father, a childcare worker, had intervened to revoke the custody of a 6-year-old girl who lived alone with her father. The child was highly sexualised and eroticised. I kept going back to her story, imagining what she would be like at 12, during puberty.

The film is built around Zelda Samson’s character, playing on the ambiguity surrounding her age. How did you find the actress and work on her part-child, part-woman role?

I envisioned a little girl from a middle-class or wealthy background, graceful and with a porcelain face. I put up adverts at equestrian centres and ballet schools. But the profiles didn’t quite match; they lacked the contrast between the Dalva created by her father and the one without him. Then I fell for Zelda, a wild little girl, tomboyish and with a dark, brazen look. It worked at once, giving depth to her character.

Her face is both doll-like and photogenic, while her physique changes depending on the way one films her, appearing in turn very childish or mature. We hired a former dancer to work on her posture, the way she walked, sat or ate. We also put a lot of effort into her dress, makeup and hairstyle, because we did not want Dalva to be a Lolita. She’s a young girl with the grace of a woman, so we had to avoid eroticising her or making her look vulgar. And of course we provided psychological support throughout the shooting to ensure she felt comfortable.

In recent years the #MeToo scandal and protest movement has heightened awareness of the sexual violence and harassement suffered by women. When it comes to incest, however, things appear to be moving more slowly. What are your thoughts?

When I started writing the film six years ago there was hardly any talk of incest. Then the #MeToo wave allowed some cases to emerge; I’m thinking in particular of Camille Kouchner’s book (a 2021 memoir revealing the abuse suffered by the author’s twin brother at the hands of a prominent French intellectual). But the attention has faded again. Incest remains a taboo subject due to the scale of its repercussions: denouncing incest means detonating the whole family dynamic.

I think there is also a lack of education on the subject. During casting I realised that none of the children had any notion of what incest means. It’s a word we don’t teach children, even though statistics show that the problem affects, on average, two children in each classroom. It was unthinkable for us to have children pass the auditions without known what the film was about.

Cannes 2022 rolls out the red carpet for Indian cinema

In each case I called the parents first and asked them to broach the subject with their children, so they could make an informed decision about whether or not they wished to take part. Of course, children don’t respond to the notion of incest in the same way as adults. For them, a film set is primarily a game, something magical. In some ways the subject is more difficult to approach for adult actors like Alexis Manenti, who plays the childcare worker.

It’s only your first feature film and already you’ve been honoured at the world’s most prestigious film festival. How does it feel to be at Cannes and what are your hopes for the movie?

I’m delighted, of course! I’m thrilled because a screening at Cannes can give a huge boost to the film at a difficult time for the industry, with cinema attendance ebbing. I’m also well aware that the film tackles a subject many people will find difficult. I hope its presence at the festival can persuade them to overcome the misgivings they might have.

Of course “Dalva” touches on a very serious matter, given the devastating impact of incest on children. But it is also, above all, a film about healing and restoration. For me it’s also a radiant movie, carried by the energy of its young cast. I want people to see it as a film that is full of hope.