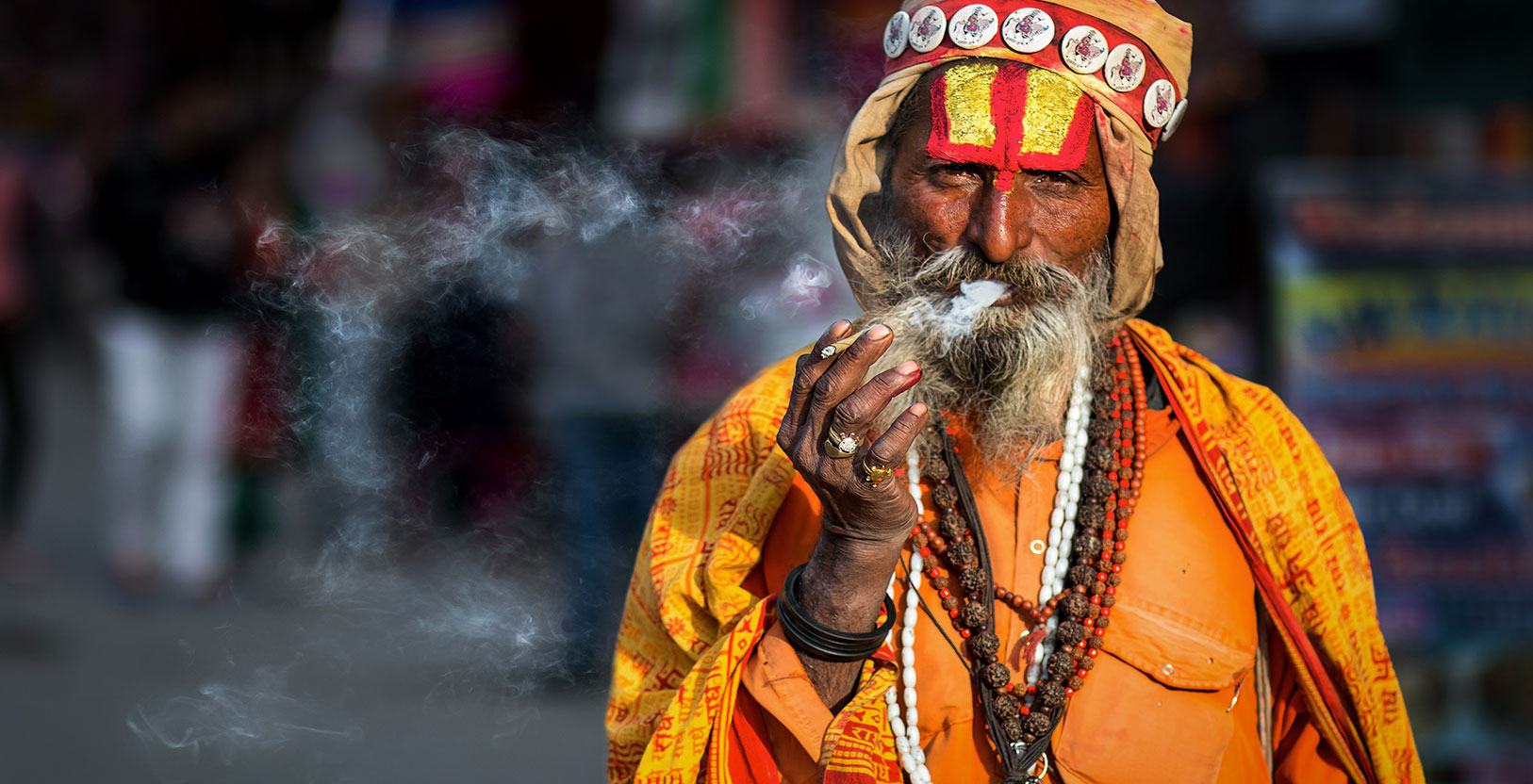 CANNABIS CULTURE – How does an emerging medical cannabis extracts industry exist in a country which has 10 years to death penalty for (commercial) cannabis possession?

India is the land of dualities. As the privileged take pride in flaunting their legally delivered-to-home cannabis tinctures on Instagram reels, a farmer trying to feed his family just 300 miles away is arrested for a mandatory minimum sentence of 10 years for essentially the same compound.

So when the Indian hemp expo 2022 reached out inviting connoisseurs, journalists, doctors and medical industry specialists for the first-ever conference on cannabis in India, I was cynical about what to expect. I figured the expo and conference would include just theoretical talks of an indefinite future with the same old exaggerated claims of cannabis curing everything doused in traditionalist organic pseudoscience. Instead, there was a wide display of capitalism meeting the hippie revolution of global level certified, tested, government-approved products of every concentration and potency possible.

To understand how cannabis medicines are selling in India despite it being illegal, it’s important to know its history here. Cannabis is said to have originated somewhere in Central Asia, where as medicine and recreational use were brought to India between 2000 and 1000BC. Cannabis received a special religious privilege against moral as well as religious-political prohibitions since then. In Hinduism, the country’s almost 80% population, cannabis has been included in religious mythology and actual scriptures as a miracle cure for all sorts of medical illnesses as well as a ‘joy giver’. As such, ancient India accepted cannabis as a socially acceptable way to heal, celebrate as well as to relax. This Hindu majority would go on to play a crucial role in finding a loophole in the drug law.

Closer to modern history, The British produced an extensive 3200+ page long report on cannabis uses in India, aptly titled “Indian Hemp Drugs Commission” in 1894. The report cites as the most reliable independent from religious mysticism reporting of cannabis use in India. It included testimonies from doctors, religious priests, heads of lunatic asylums, farmers, tax collectors, dealers and every working-class consumer. It concluded that moderate use neither damaged a person’s individual health, nor was a burden on the exchequer, or the medical infrastructure or spiritual moralism in the country.

However, all would change in modern India in 1985, when India passed its Narcotic Drugs and Psychotropic Substances Act (NDPS Act), in order to pass its obligations treaty obligations under the Single Convention on Narcotic Drugs, Convention on Psychotropic Substances by the UN. Suddenly, a country that thrived with cannabis resin (charas) shops, a prime destination on the hippie trail, had criminalized cannabis along with other drugs with heavy jail sentences. Currently, the NDPS act includes almost the same privileges as anti-terrorism law – the police are allowed to seize virtually any property of a suspected smuggler indefinitely, with a potential for death sentence for repeat offenses and the burden of proof laying on the accused. Bail is a provision mentioned in the law, but rarely given because of social stigma and despite an overburdened legal system delaying trials.

Cannabis culture in India is as loud as any nation where it’s illegal can possibly dream of. A 2019 survey estimates a conservative 31 million people are current users of cannabis. Every state imbibes its own culture from a youth rebellion to working professionals lighting one during a heavy lunch break or post-work. The medical industry aims to tap into this market to switch towards legal, cleaner, safer and less harmful alternative forms of ingestion.

While technically the NDPS act allows cannabis use in approved medicines, no such medicines exist, nor does a method for legal cultivation or a doctor willing to risk social stigma to prescribe. Here’s when the current right-wing Prime Minister, Narendra Modi won by a landslide victory in 2014. A part of his election propaganda included creating a fear of a cultural demise and promoting traditionalist concepts, including a completely alternative form of medicine called Ayurveda. Like every alternative medicine, Ayurveda often lacks peer review for its bold claims and follows a traditionalist belief system that relies on herbs, diets, meditation, and massages rather than a scientific process. However, since it is the medical philosophy of Hinduism, the feather in the cap of the Prime Minister, Ayurveda suddenly gained legally the same powers as actual medicine. Suddenly, Ayurvedic doctors which lived only on fringe YouTube videos and middle-aged WhatsApp family groups were mainstream, all-over billboards and TV channels. People wanted a “herbal” solution to mild and serious illnesses, and that’s when some startups discovered Ayurveda specifically prescribes cannabis in its thousands of years old medicine rulebook.

Behold, medical cannabis emerged via the alternative medicine route. Virtually any potency of THC and other cannabinoids could now be sold as medicine. However, the NDPS prohibited cannabis cultivation, while some states were allowed to make their own decisions. A few states wanted to experiment with how medical hemp would operate, and they started allowing legal cannabis with a caveat – only indigenous plants were to be allowed and with less than 0.2% of THC content. Only leaves, not buds, can be used in cannabis preparations.

Cannabis leaves can include zero to 0.2% THCA, the precursor to the active metabolite THC that produces a “high”. This low percentage is nothing compared to buds that can go up to 30%, however, given the comically low purchasing price of the leaves per pound, extracts could be generated by the gallons. Now with dozens of startups active in the market, adults in India can order their cannabis-based medicines with a wide variety of flavors, potency and cannabinoid profiles. From CBD isolate extracts that won’t get you high, to extremely potent pure paste extracts that definitely will, to mild oral tinctures, everything except smokable buds are legally available over the internet.

Several cannabis-based retreats are opening in sponsorship with some of these companies as well. Although rare but multiple health food stores exist where one can walk in and check all cannabis products to select one to best suit their medical condition. However, all products containing THC require a medical prescription (by an Ayurvedic doctor). All startups have multiple doctors in affiliation with them that generously provide prescriptions in a matter of minutes to hours by paying a small token fee (less than 10$) via the phone or filling a virtual form. The conditions legally allowed to prescribe cannabis range from insomnia, to a lack of appetite, depression, IBS all the way to cancer.

Being still novelty products, price ranges on extracts are between an average range of 4-10x the cost of cannabis purchased illegally off the black market of similar potency. Patients are however assured of standardization and similar potency with predictable dosing, said Yash Kotak, the co-founder of Bombay Hemp Company, one of the largest recognized brands in India. “Quality is of paramount importance for any medical-grade products, more so for cannabis leaf-extract based medicines. From procuring ingredients through official Government channels to adhering to Good Manufacturing Practice (GMP) guidelines and standardized formulations, we ensure stringent quality control across all our products. These efforts are further complemented by predictable dosing under the guidance of a licensed medical practitioner, contributing to a safe and patient-centric experience”, Yash added.

Medical cannabis in India isn’t limited to grass-tasting tinctures. It includes aphrodisiac pills such as Kameshwar Modaka, sold by a startup called Hemp Street. Their stall at the expo included other displays of digestive aids and painkillers, all composed of cannabis oil along with other ayurvedic herbs.

Products aren’t limited to humans alone. CannaEase pet range by Ananta Hemp has a bunch of oils composed of hemp seeds for omega 6 &3’s. They also add essential oils to their products, such as a cannabis cramp reliever roll-on stick. Similar ingredients are often advertised for different uses, such as the same 100% hemp oil is marketed as hair and skin oil for humans and as a moisturizer for pet cats and dogs by Happie Hemp. Despite over 30+ startups in the expo, and more who did not participate, essentially products are near about the same ingredients, same packaging sizes as well as similar pricing. Oils can be full spectrum, containing either an equal 1:1 ratio of THC: CBD, or be CBD / THC dominant. If swallowing raw oil doesn’t appeal to you, there are also capsules with just cannabis extract and a filler, often hemp seed powder and hemp seed oil, nothing else, such as CS50 capsules by Noigra. Of course, hemp oil isn’t bioactive, so there are no immediate effects.

Startups were curious to showcase their products such as hemp protein powders and hemp seeds to be topped on your cereal, primarily catering to extreme health aficionados, because right now, they don’t appear to have any kind of appealing flavors. Products ranging with around 3000mg of active cannabinoids range around 6000 Indian rupees or about 80 US$. There’s also a range of delicious smelling soaps made from a base of hemp oil and some other essential oils that work great for skin illnesses but are priced at a heavy 400+ Indian rupees range. A commercially available soap of similar size can cost around 10x less.

Only a few startups were bold enough to try something completely new. Limited by the legal use of only leaves and no buds, a startup called The Trost launched hemp cigarettes – a pack of 5 smokes filled with herbs such as mint, chamomile, peppermint, and lavender and cannabis leaves, that produce mild light-headedness. It is bizarre to imagine being legally prescribed by an Ayurvedic doctor to smoke at least one of these before sleeping to relieve anxiety, but it’s here, and it’s now. For the bold, a few of the startups reluctantly also sell pure raw cannabis extract paste. It’s black, tarry, and sticky, and extremely potent resembling RSO, primarily prescribed to cancer patients looking for very high doses of THC and other cannabinoids. Manufacturers present at the conference also mentioned they sell pure distillates, which are free from chlorophyll and plant matter. Startups mentioned they’re advertising these to doctors more than direct consumers.

As I walked out of the expo, a bit giggly on the CBD and largely disappointed in no THC products being given away as samples, the mere sight of hundreds of enthusiasts, journalists and doctors talking about cannabis was beautiful. There is hope for prices to reduce from hipster novelty products to an average man’s affordable medicine. Perhaps in the near future, one may not even need to hide the truth about medical conditions for a little bit of recreational joy and calmness.