The biggest night in fashion is just around the corner.

So the stars turned out in force for Anna Wintour’s pre-Met Gala party in New York on the weekend, taking place the day before the prestigious event on Monday.

Dressed to impress for a star-studded dinner held by the Vogue magazine editor, the likes of Vanessa Hudgens and Blake Lively were in attendance.

Also attending the fashionable dinner were James Corden and his wife Julia Carey, who seemed in high spirits as they chatted with fashion guru Anna outside the venue.

Lovely ladies: Vanessa Hudgens sizzled in a plunging little black dress while Blake Lively wowed in a quirky suit gown as they attended Anna Wintour’s pre-Met Gala party in New York on Sunday, the day before the prestigious event 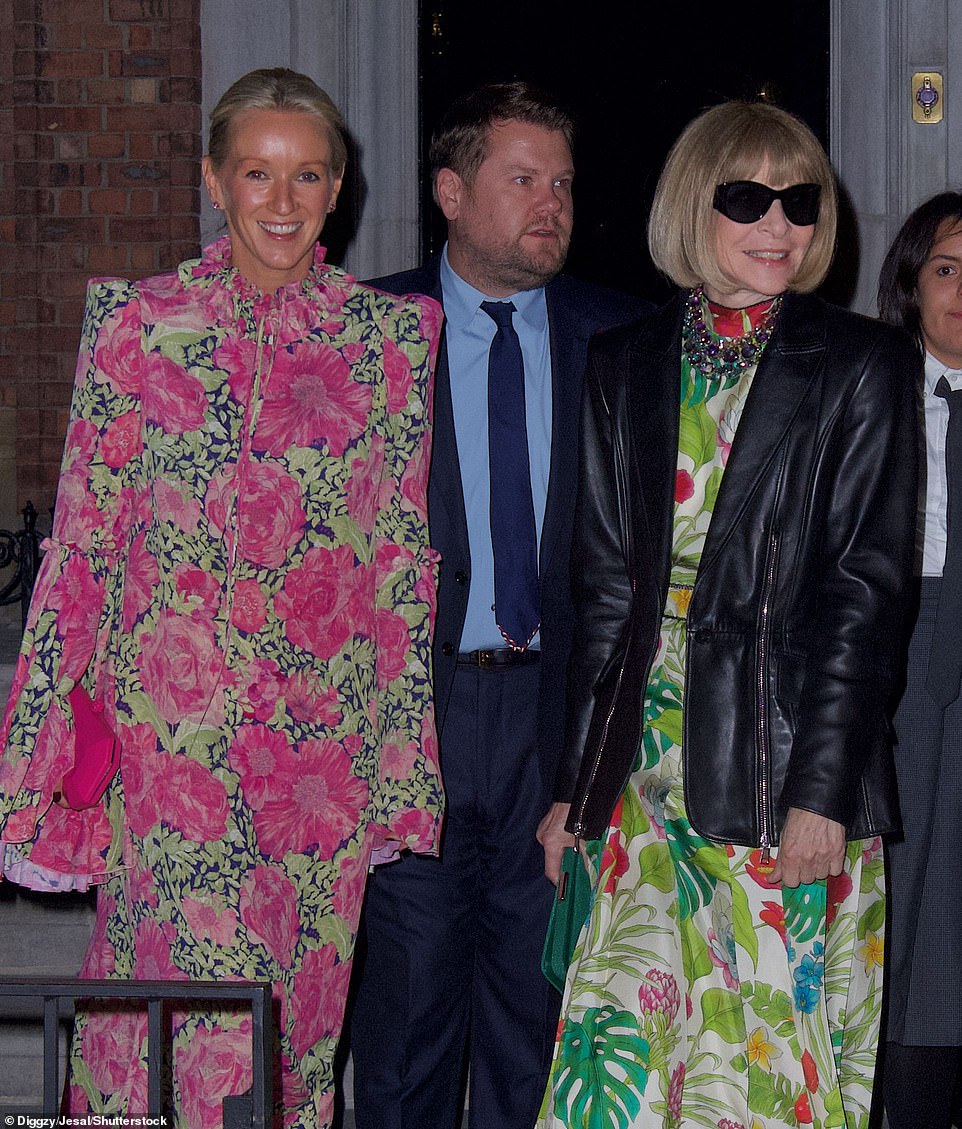 Terrific trio: Also attending the fashionable dinner were James Corden and his wife Julia Carey, who seemed in high spirits as they chatted with fashion guru Anna outside the venue

Vanessa, 33, looked sensational as she arrived in a black Oscar de la Renta dress with a plunging neckline and sheer front panel that she teamed with an oversized blazer.

The Disney Channel alum completed her outfit with black open-toed collar heels and accessorized with a bracelet and rings.

The actress was recently announced as one of the two hosts of Vogue’s 2022 Met Gala Live Stream, and will appear alongside LaLa Anthony and the magazine’s European editor-at-large Hamish Bowles, during the event. 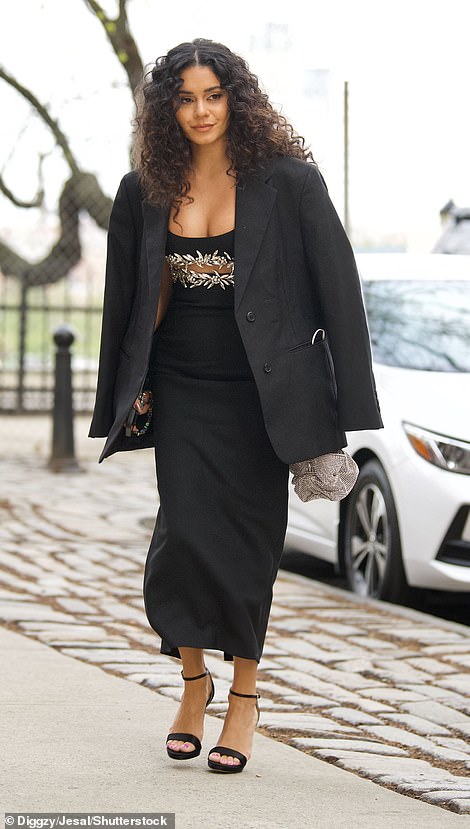 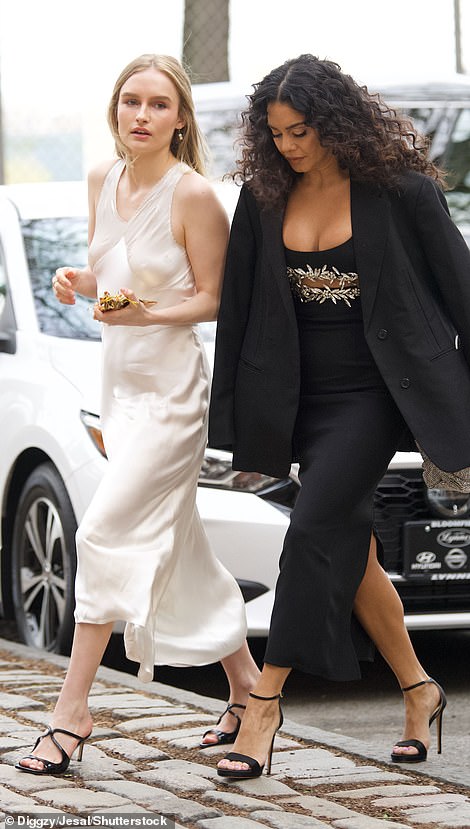 Dressed to impress: Vanessa, 33, looked sensational as she arrived with her friend clad in a black maxi dress with a plunging neckline and sheer front panel that she teamed with an oversized blazer 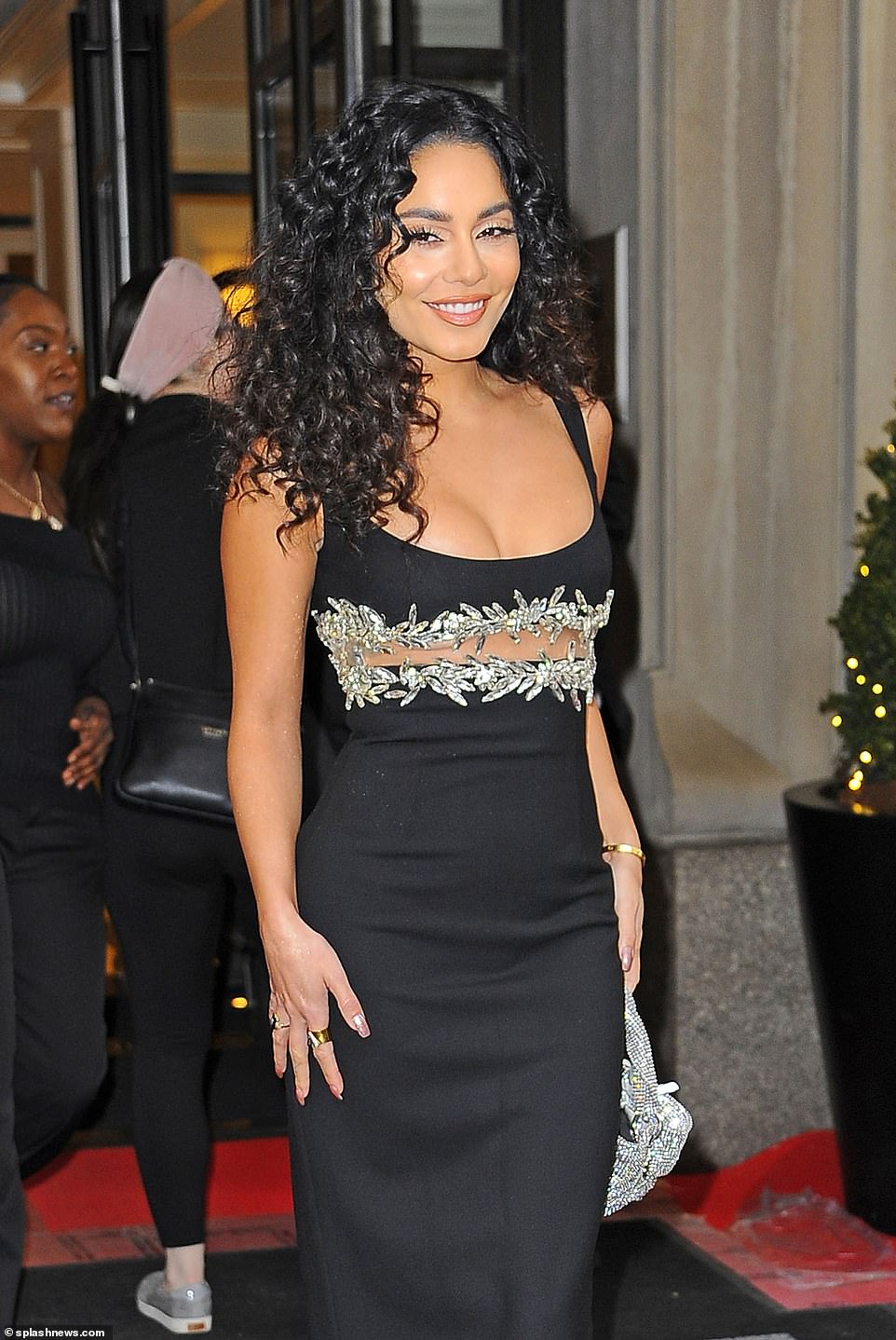 Stunning: Vanessa showed off her Oscar de la Renta gown earlier in the  day as she left The Mark Hotel in New York City

Blake, 34, also dazzled as she arrived at the  dinner in a quirky sequinned gown that was cut away to expose a sleeveless suit top and tie.

The floor length glittering dress skimmed over a pair of white stiletto heels, and Blake kept her accessories to a minimum with just a pair of diamond stud earrings.

She completed the look with a longline pinstripe navy waistcoat while she toted a small navy handbag. 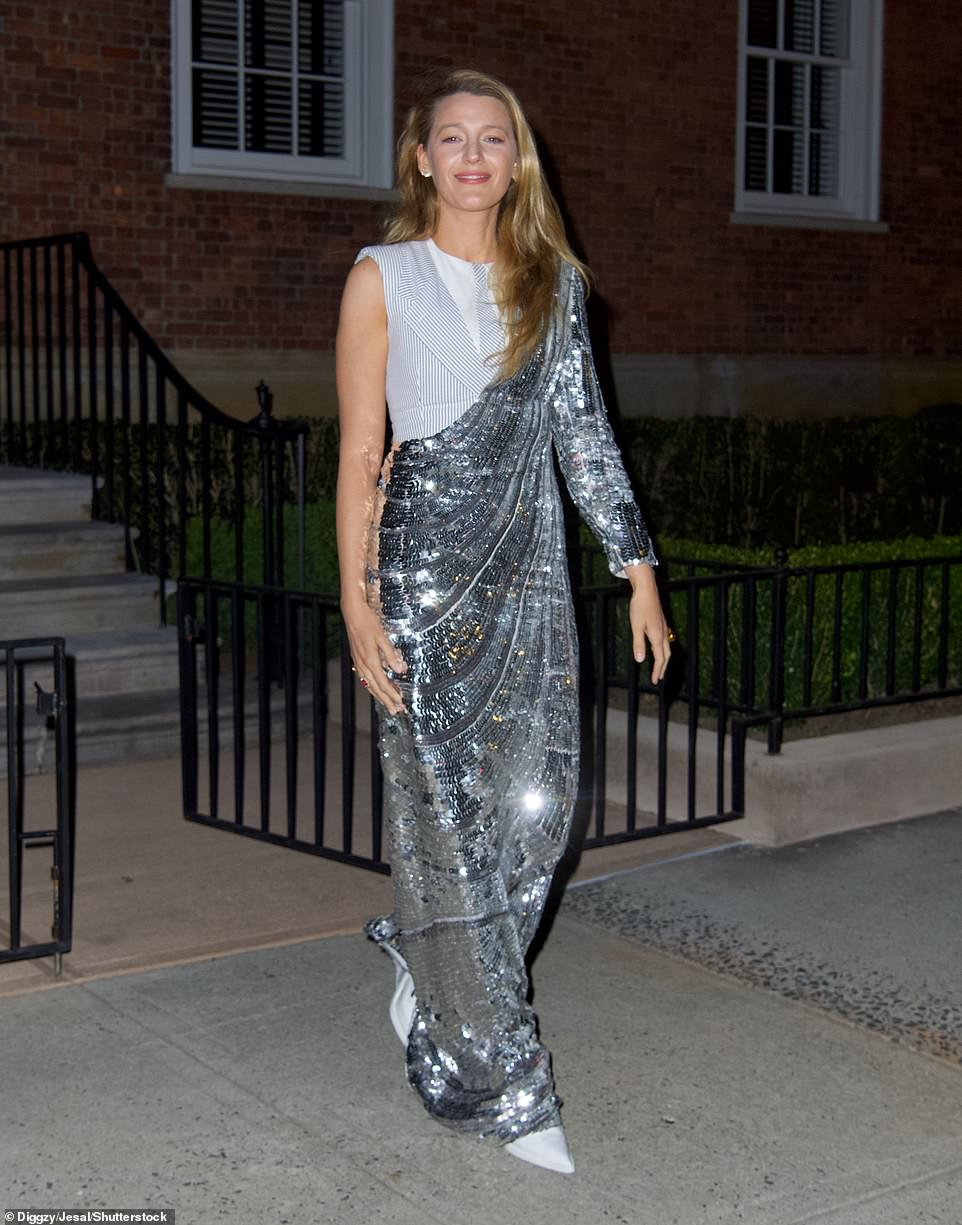 Sassy in silver: Blake, 34, also dazzled as she arrived at the dinner in a quirky sequinned gown that was cut away to expose a sleeveless suit top and tie

Chic: The floor length glittering dress skimmed over a pair of white stiletto heels, and Blake kept her accessories to a minimum with just a pair of diamond stud earrings

James, 43 – who recently announced he was quitting his role as host of The Late Late Show – arrived with glamorous wife Julia, 42, on his arm.

The mother-of-three looked radiant in a high necked ruffled floral dress in an eye-catching green and pink print that she paired with a fuchsia boxy clutch bag.

The blonde bombshell seemed in great spirits as she chatted away with Anna, 72, who also opted for a floral gown that she clashed with quirky boots. 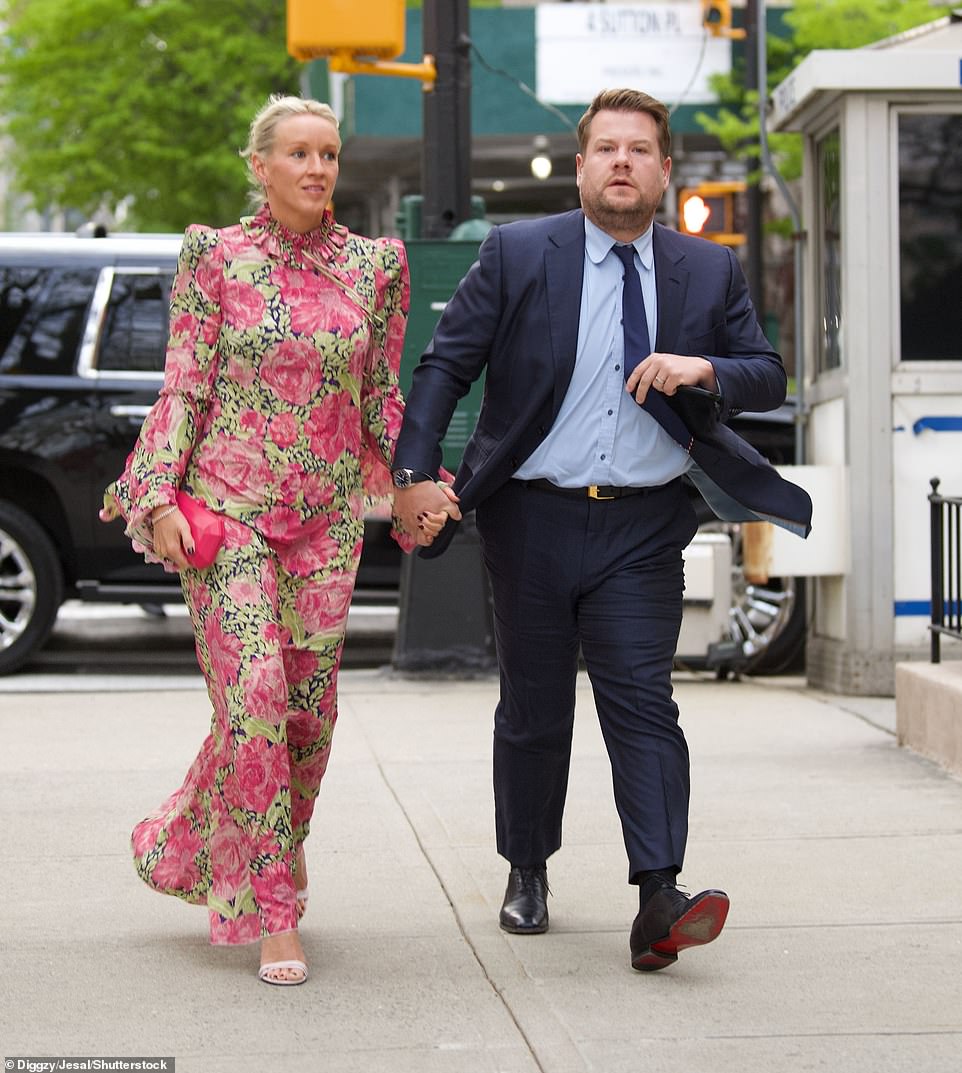 Cute couple: James, 43 – who recently announced he was quitting his role as host of The Late Late Show – arrived with glamorous wife Julia, 42, on his arm 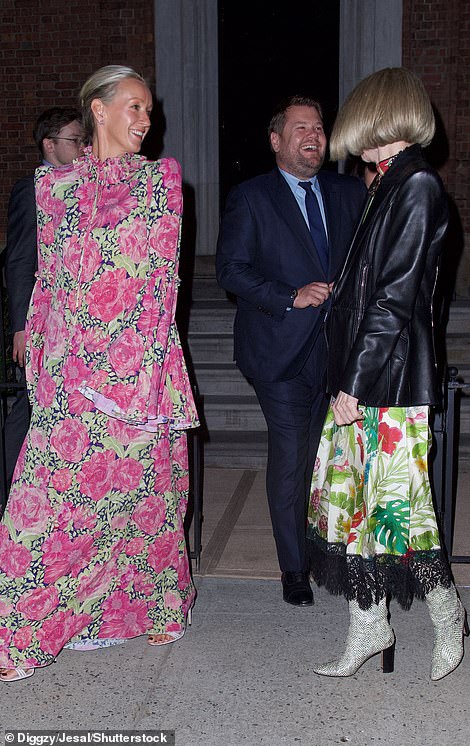 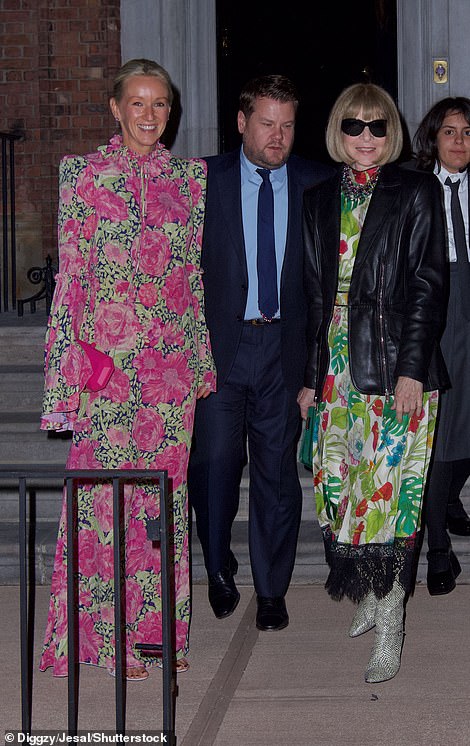 Blooming lovely: Mother-of-three Julia looked radiant in a high necked ruffled floral dress in an eye-catching green and pink print that she paired with a fuchsia boxy clutch bag 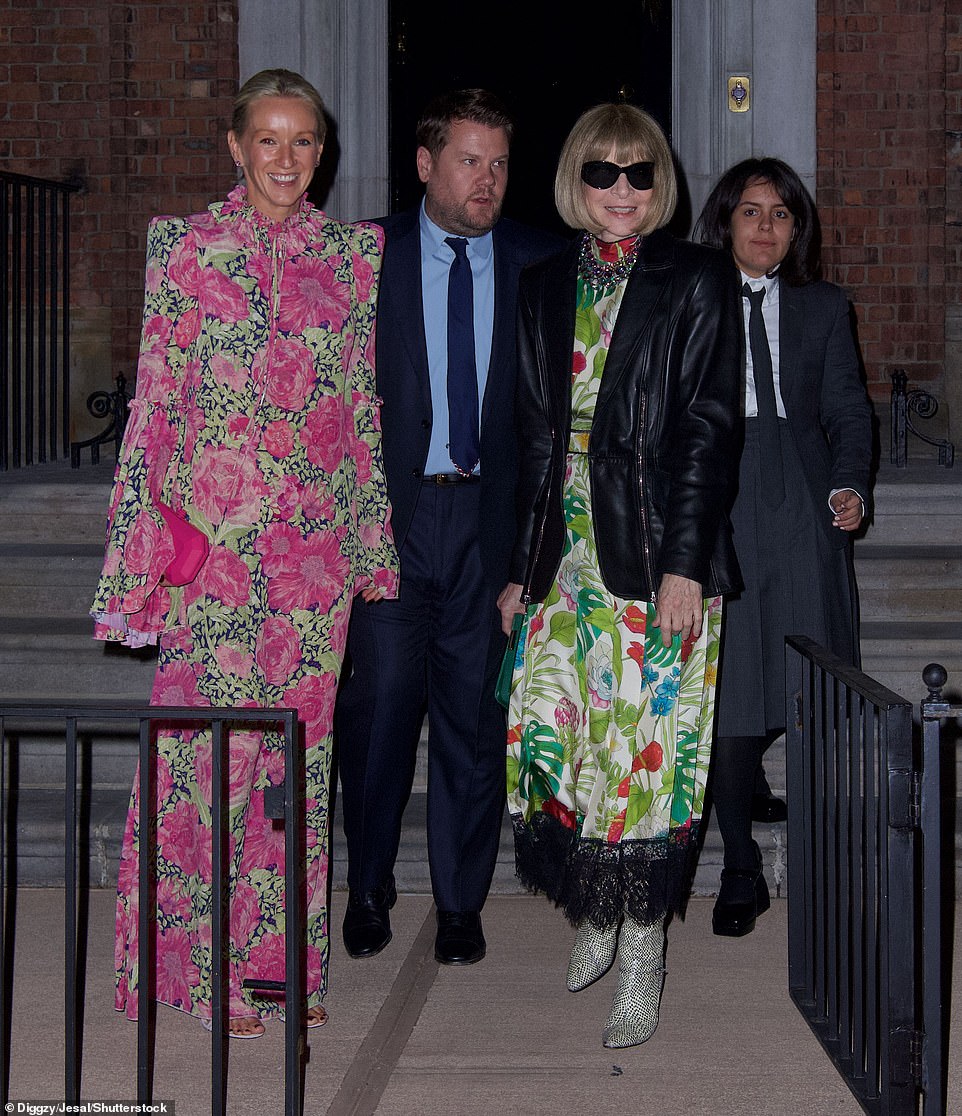 Catching up: The blonde bombshell seemed in great spirits as she chatted away with Anna, 72, who also opted for a floral gown that she clashed with quirky boots 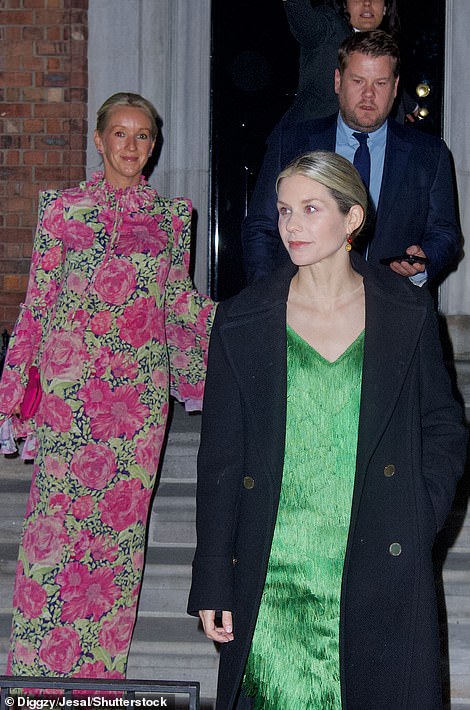 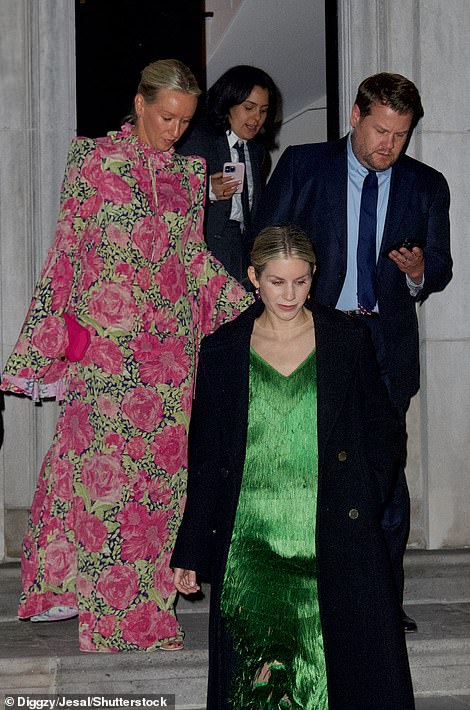 Making a move: Julia and James left the dinner arm in arm behind another glamorous guest

The Metropolitan Museum of Art Costume Institute Benefit, also known as the Met Gala, is considered by many as the ‘Super Bowl of celebrity red carpets.’

Fashion’s biggest night is traditionally held the first Monday in May to raise money for the Costume Institute in New York City, with last year’s event moved to September due to the pandemic.

This year’s dress code is ‘gilded glamour’ to match the theme of ‘In America: An Anthology of Fashion,’ a continuation of last year’s ‘In America: A Lexicon of Fashion.’ 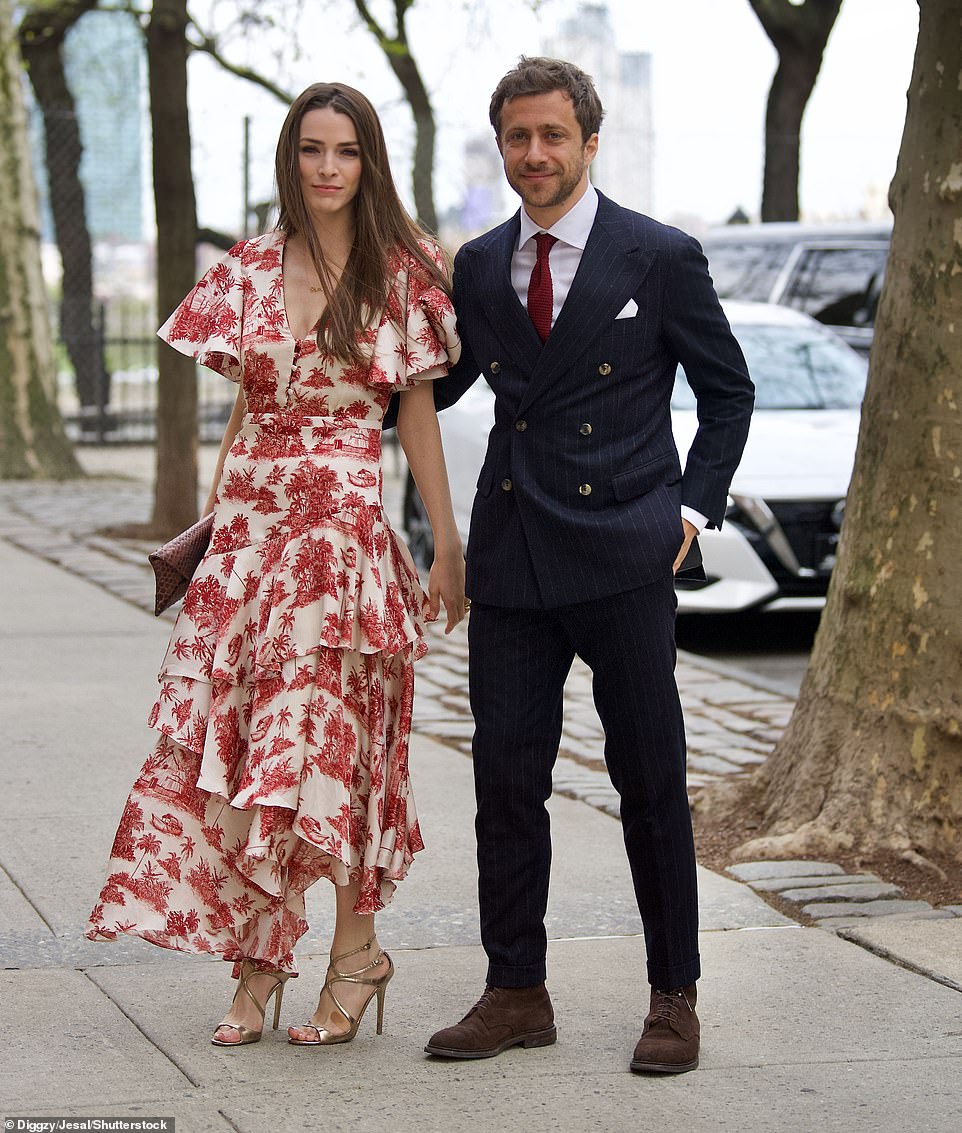 This will be Miranda’s first time as a Met Gala co-chair (and guest) but he was originally intended to co-host the 2020 edition before the pandemic forced its cancellation. 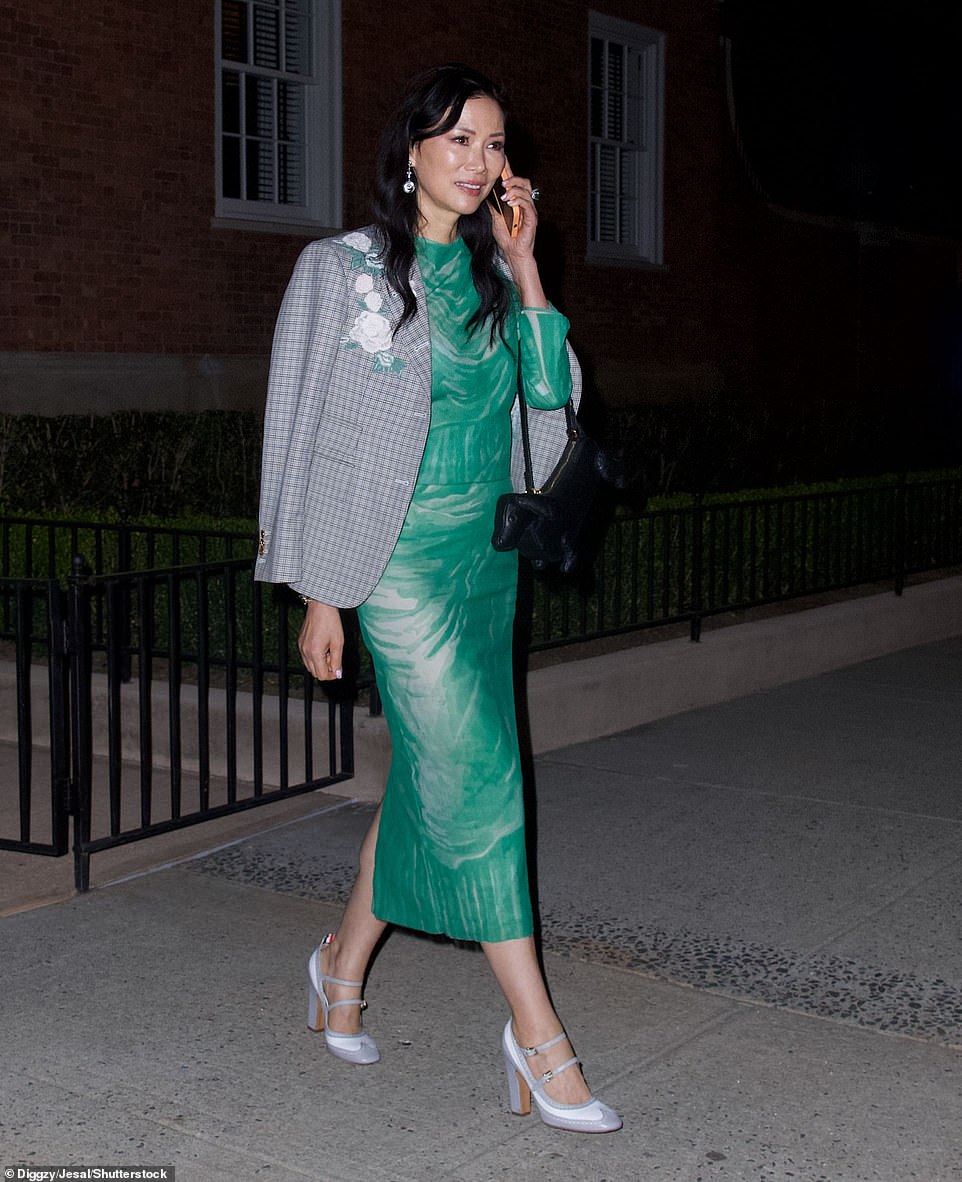 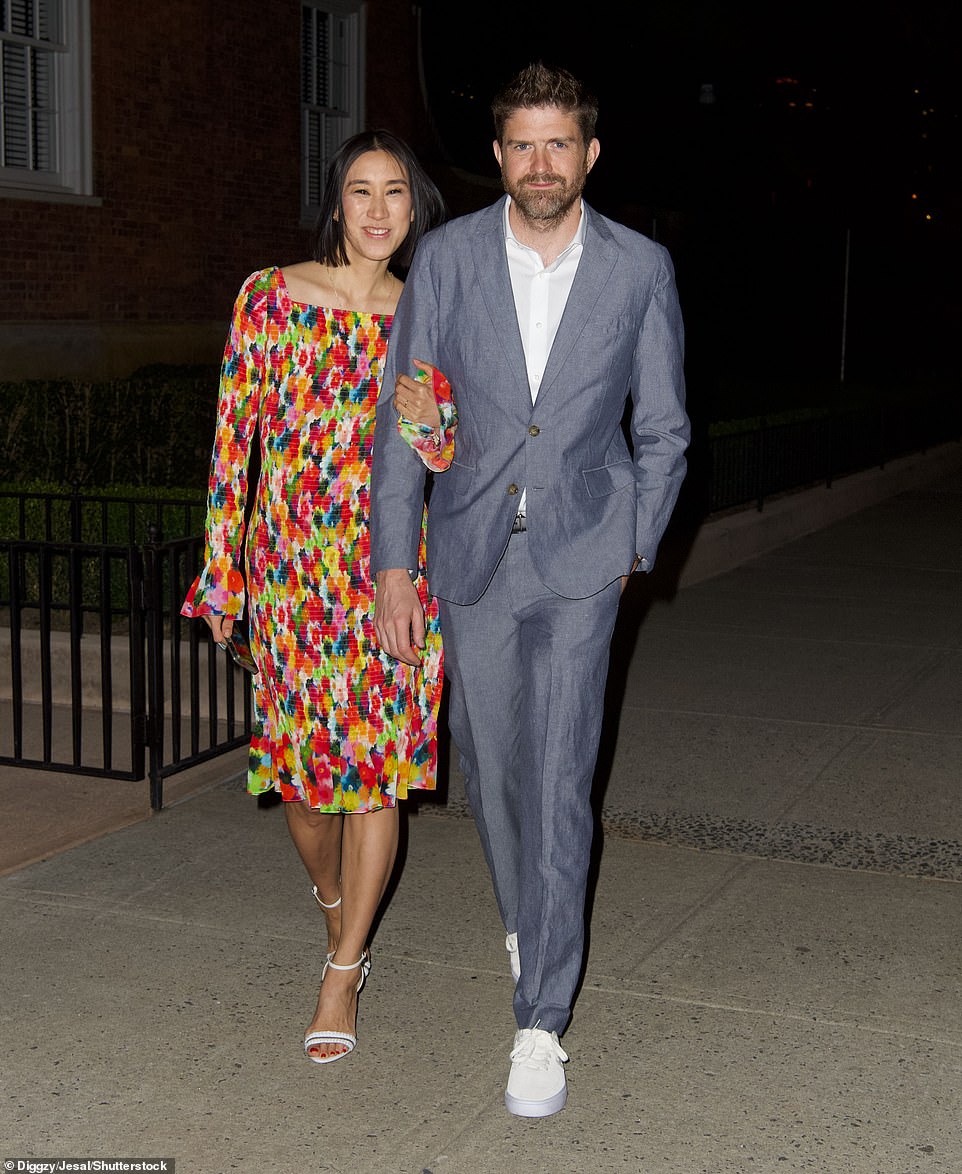 She’s so Lucky: Former beauty and health director at Teen Vogue and Lucky editor Eva Chen looked stylish in a rainbow coloured dress as she brought husband Thomas Bannister along to the event

Vogue editor-in-chief Anna Wintour is once again supervising the benefit as chairwoman, a position she’s held since 1995. Her fellow honorary co-chairs are designer Tom Ford and Instagram head Adam Mosseri.

As usual, the sartorial theme comes from the exhibit the gala launches: ‘In America: An Anthology of Fashion,’ which is the second of star curator Andrew Bolton’s two-part show exploring the roots of American style.

Bolton said eight directors will create what he called ‘cinematic vignettes’ in the period rooms of the American Wing of the museum.

Similar to the September event, there will be 400 guests this year, lower than the pre-pandemic highs of 500-600 attendees.

The other four are Ford, the celebrated fashion designer who’s also an acclaimed film director, Janicza Bravo (Zola), Julie Dash (Daughters Of The Dust) and Autumn de Wilde (who directed the Jane Austen adaptation Emma. and is also a photographer).

The first part of the exhibition will remain on display in the rooms of the Anna Wintour Costume Center, along with the second part, until September 5.

More than half the pieces in the opening exhibition will be rotated out and garments from designers not yet featured will go on display.

The Met Gala is a huge money-maker for the museum, and provides the Costume Institute with its main source of funding.

Blake Lively and her husband Ryan Reynolds will be co-hosts of this year’s annual Met Gala celebration in New York City along with actress Regina King and singer/songwriter Lin-Manuel Miranda.

This year’s Costume Institute Gala theme is In America: An Anthology of Fashion with a recommendation that guests dress in gowns inspired by the Gilded Age, according to The New York Times. Think corsets and big skirts.

Honorary chairs include Anna Wintour of Vogue magazine, Adam Mosseri, the head of Instagram and Tom Ford, a high-end fashion designer best known for his stint at Gucci and, now, a film director.

Lively is no stranger to the event as she has gone nine times since her debut in 2008. Here is a look at her glamorous statements from years past.

The Gossip Girl actress wore a strapless black gown by Ralph Lauren which had feathers on the bottom below the knee as she added black gloves and diamond jewelry. Her honey blonde hair was worn back and she went light on the makeup. The theme was Superheroes: Fashion And Fantasy. 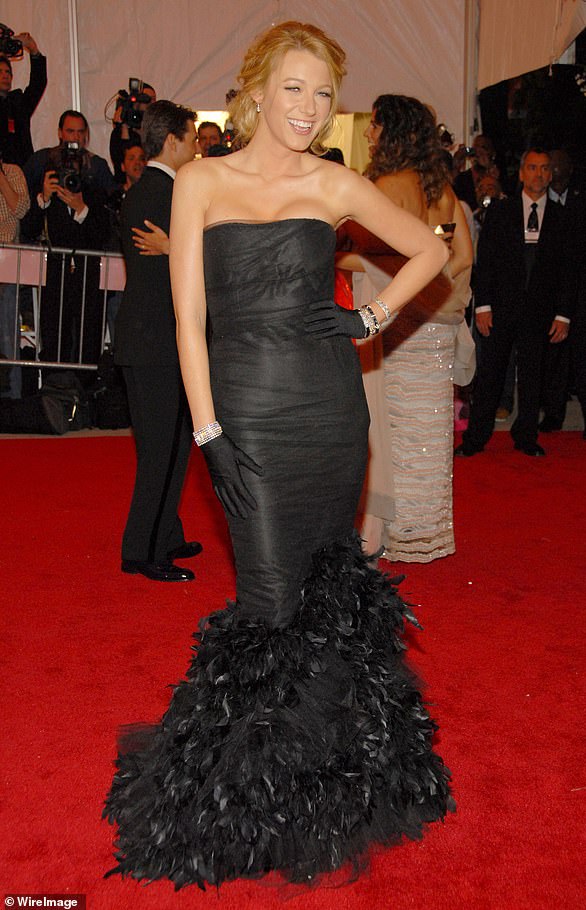 The siren revved up the sex appeal in a plunging royal blue gown from Versace with a high slit up her toned leg and narrow straps that made the most of her figure. She had a radiant tan and her hair was slicked back for added drama. Gold strappy heels made her look ready for a disco. The theme was The Model as Muse: Embodying Fashion. 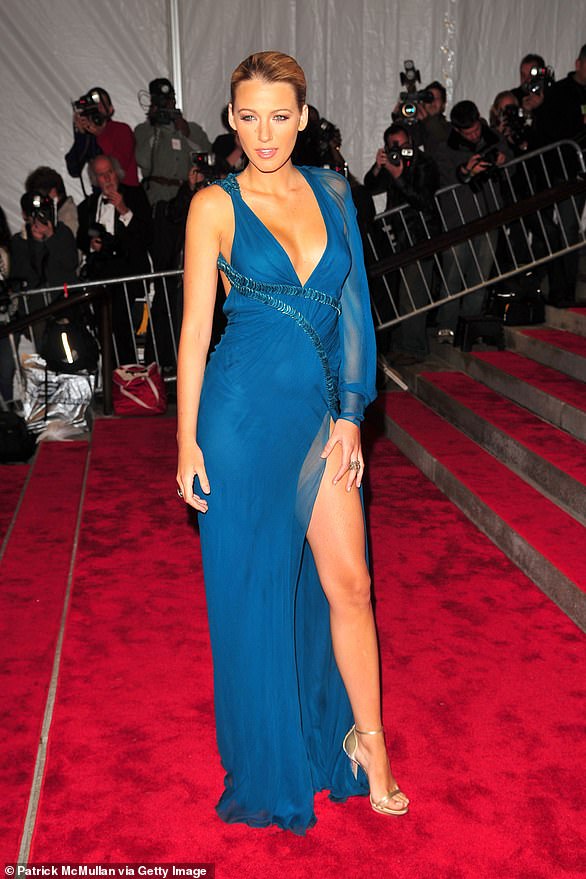 Again she was in royal blue, but this dress was very short, ending just below her panty line, which showed plenty of her her log lean legs. The Marchesa dress also had one wide embellished strap up one side. She added a big cuff bracelet, had her hair slicked back and added diamond stud earrings. The heels were black and nude pumps. The theme was American Woman: Fashioning a National Identity. 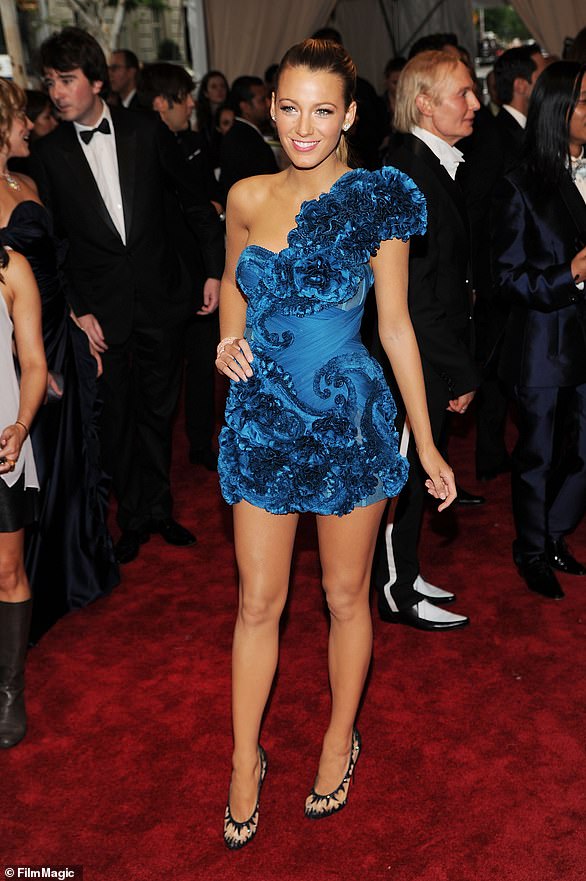 Lively looked like a royal in her metallic and nude floor-length Chanel gown that had a long sheer piece of fabric hanging down the front. Her strawberry hued hair was worn down in soft curls that fell over her shoulders in a Rita Hayworth fashion. She added strappy nude heels. The theme was Alexander McQueen: Savage Beauty. 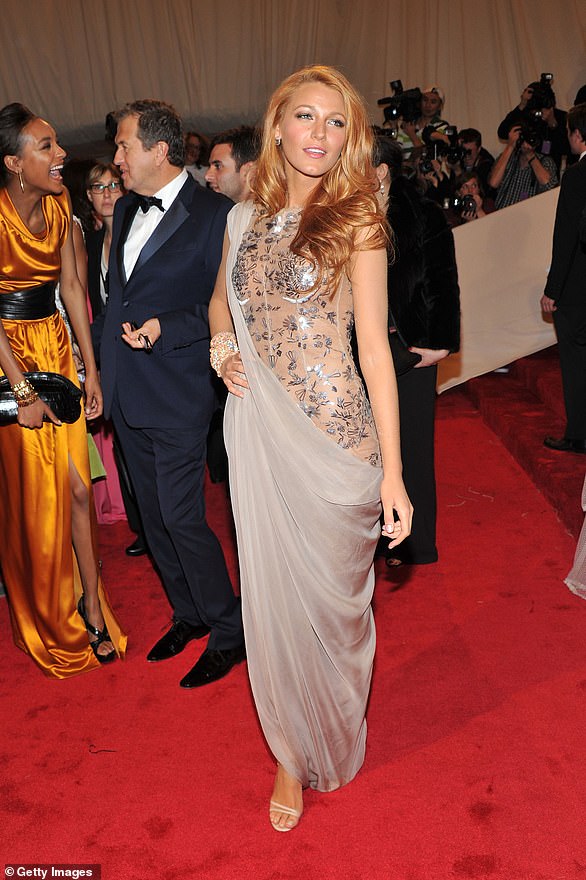 Blake turned heads in a strapless pale blue gown with black feathers below the hips and a raven black bottom with a train. The dramatic dress was by Gucci. Her hair was pulled back and she kept the makeup glossy for an elegant look. The theme was PUNK: Chaos to Couture. 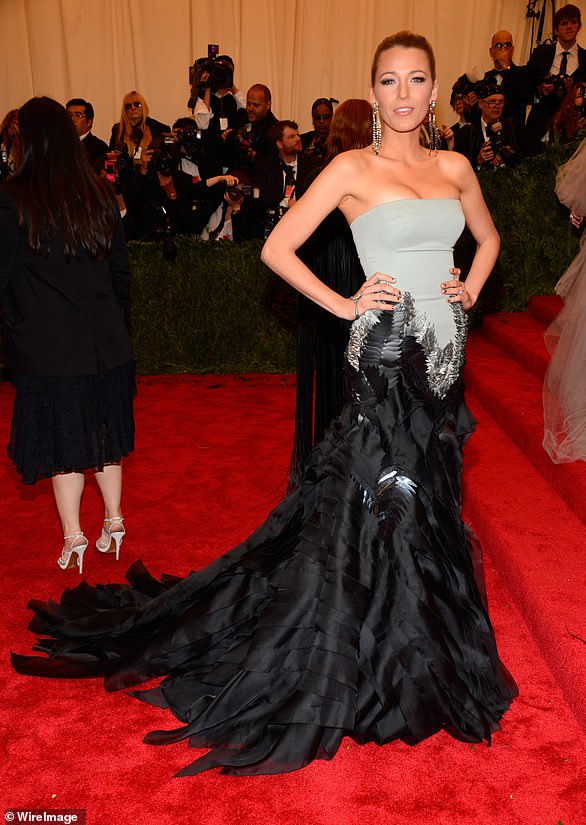 The Los Angeles native went with Old Hollywood glamour as she wore a sparkling blush pink gown from Gucci that had a plunging neckline, criss-crossed in front and had a mermaid finish with a substantial train. She also had a long piece of fabric falling down from the back of her shoulders. Her blonde hair was worn Veronica Lake style as it was parted to one side and had soft curls. Long dramatic ruby earrings matched her oversized ruby rings. The theme was Charles James: Beyond Fashion. 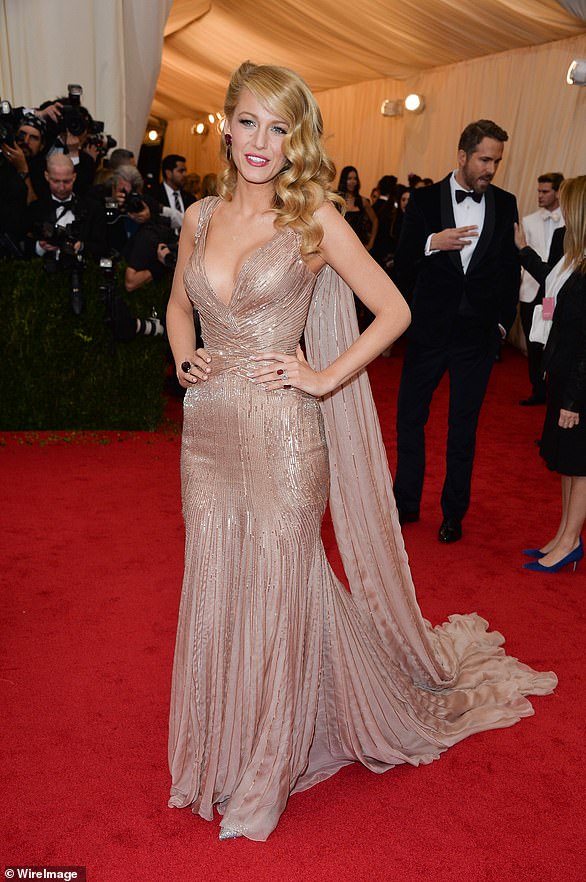 It was pure elegance this year as the Age Of Adaline star wore a strapless light pink Burberry dress with red floral accents and long earrings with her hair in a stylish chignon. The star was pregnant at the time but did not look it. The theme was Manus x Machina: Fashion In An Age Of Technology. 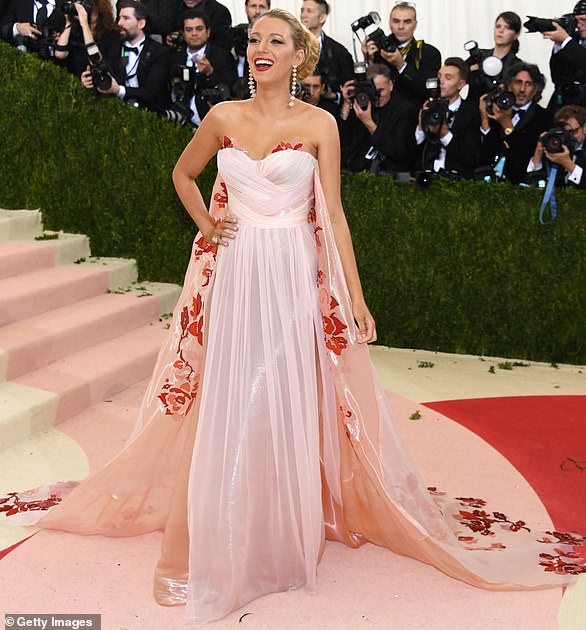 Gold looked good on Lively as she stood out in a low-cut glittery dress from Versace that was long sleeved and tight on her hips with a blue feathered mermaid finish that matched her blue earrings. Once again her hair was pulled back as she added bronzed makeup. The theme was Rei Kawakubo/Comme des Garçons: Art of the In-Between. 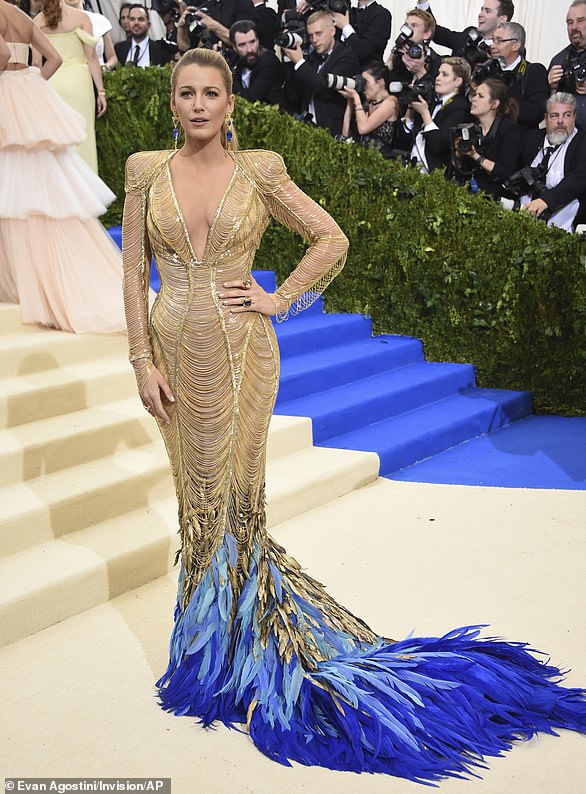 It was a dramatic turn for the Hollywood goddess as she wore bright gold and deep maroon. Her Versace gown had a heavy train with beautiful beading as she added a gold headband to lend an angelic feel. The theme was Heavenly Bodies: Fashion & The Catholic Imagination. 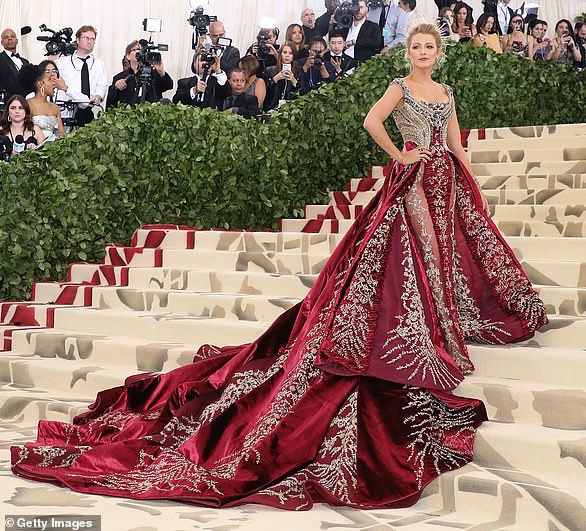