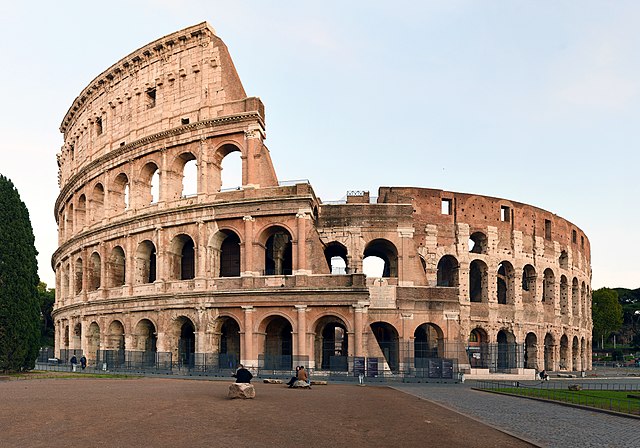 What happened to the missing half of the Colosseum? It may be a question about ancient Greece and Rome you were afraid to ask in school, as the title of Dr. Garret Ryan’s video above claims. Or maybe, after seeing the massive ancient ruin’s jagged profile all your life on pizza boxes and softball t-shirts sponsored by your local Italian eatery, you never thought much of the Colosseum’ shape at all. You could spend hundreds of dollars and build a LEGO Colosseum, hundreds more and visit it yourself, or drive past it every day on your commute, and never think much about it.

Despite hosting more visitors per year than Trevi Fountain and the Sistine Chapel combined, the monument to bread and circus imperial Rome suffered from severe neglect in the millennia and a-half after it was used as a gladiator arena – “some 1,500 years of neglect and haphazard construction projects,” Tom Mueller writes at Smithsonian, “layered one upon another.” Used as a quarry after the 6th century, for most of its long, decaying life, the amphitheater and its “hypogeum” (the intricate system of tunnels and earthworks underneath) went fully to seed.

Until relatively recently, most humans somehow managed to ignore the Colosseum. But curiosity about its history pays:

Down through the centuries, people filled the hypogeum with dirt and rubble, planted vegetable gardens, stored hay and dumped animal dung. In the amphitheater above, the enormous vaulted passages sheltered cobblers, blacksmiths, priests, glue-makers and money-changers, not to mention a fortress of the Frangipane, 12th-century warlords. By then, local legends and pilgrim guidebooks described the crumbling ring of the amphitheater’s walls as a former temple to the sun. Necromancers went there at night to summon demons.

In the late 16th century — before popes paraded through the Colosseum to honor Christians fed to wild beasts — “Pope Sixtus V, the builder of Renaissance Rome, tried to transform the Colosseum into a wool factory.” The venture failed, and soon after the huge variety of wild plant life began to attract botanists, who catalogued some 337 different species. The hypogeum, the architectural mechanism that once powered spectacles on the floor above, was only cleared in the 1930s by Benito Mussolini in his glorification of classical Rome.

Restoration on the Colosseum did not begin until the 1990s and visitors have only been allowed to see the ruin’s inner workings since 2011, almost 2000 years since it was first constructed between 72 and 80 AD. Originally called the Flavian Amphitheatre, the building’s name was changed to reflect its proximity to the Colossus of Nero, a monument to imperial hubris that has itself long disappeared. So, what about that missing half? “The short answer,” writes Dr. Ryan, “is: earthquakes and popes, in that order.”

The longer answer, as you might imagine, is far more colorful, and far bloodier, involving events like the Emperor Trajan’s 123-day celebration of his victory in Dacia, “in the course of which 5,000 pairs of gladiators fought and 11,000 animals were killed.” After around 500 years of this kind of bloodsport (and other amusements) and another 1,500 years of deterioration, I’d say the Colosseum has held up remarkably well, a tribute to Roman architectural engineering, the one thing the Roman Empire seemed to love more than violent death.

The Roman Colosseum Has a Twin in Tunisia: Discover the Amphitheater of El Jem, One of the Best-Preserved Roman Ruins in the World

An Animated Reconstruction of Ancient Rome: Take A 30-Minute Stroll Through the City’s Virtually-Recreated Streets

How Did Roman Aqueducts Work?: The Most Impressive Achievement of Ancient Rome’s Infrastructure, Explained

The History of Ancient Rome in 20 Quick Minutes: A Primer Narrated by Brian Cox