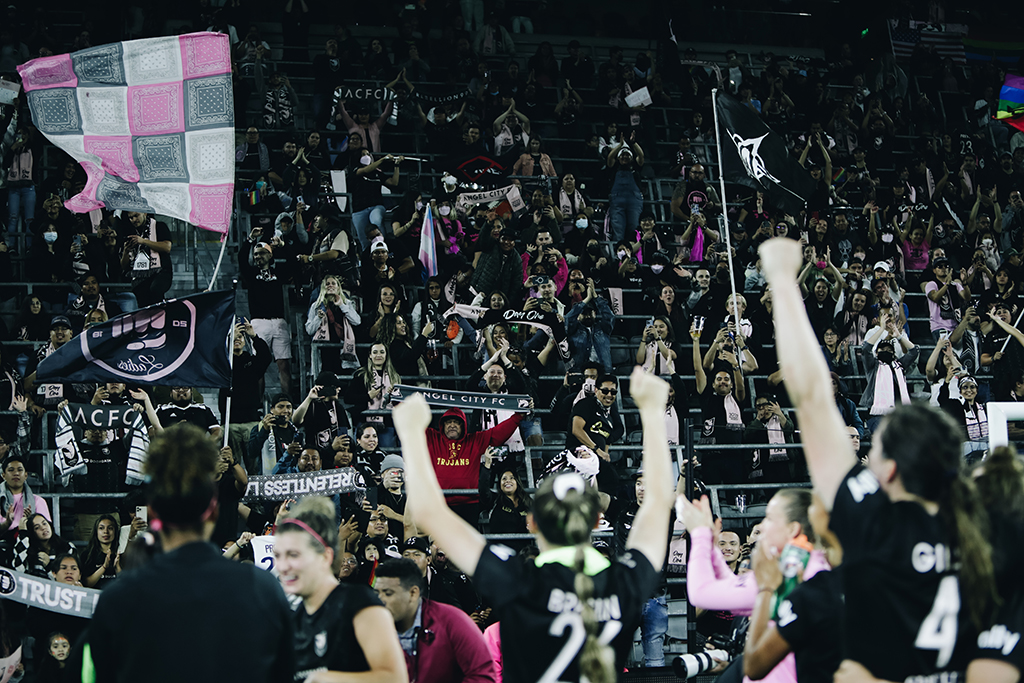 It may as well have been a Hollywood movie premiere with some of the A-list investors cheering from the sidelines, including Zoe, Hamm, Jennifer Garner, Lilly Singh and Abby Wambach.

The team’s debut comes at a time when optimism for women’s sports is at an all-time high — fitting, as the 50th anniversary of Title IX approaches next month. TV viewership is up, there’s greater attendance and more media coverage all around. For instance, 22,000 people filled out Banc of California Stadium to see Angel City’s first match. And the NCAA Women’s Basketball Tournament championship game between South Carolina and UConn on ESPN averaged 4.85 million viewers — the most watched title game in nearly two decades.

But industry leaders are cautious in their enthusiasm.

“We’ve been here before,” said Haley Rosen, a former professional soccer player and founder and CEO of the media platform Just Women Sports. “We need investment to grow, full stop. And there’s a positive flywheel effect at work, where the more brands that come on board, the more their peers and competitors notice and follow suit.”

Angel City, for one, is seeking to spark a wave of change. The soccer team formed in a non-traditional sense as the owners focused on a mission-first mindset, with women at the helm. “The idea behind Angel City was not just about building a sports club and having a positive impact in L.A., but also to strive for equity for these female athletes, pay them what they deserve and draw attention and awareness for this incredible sport,” said co-founder and president Uhrman.

With this model of leading with passion and purpose as the backbone, investors and sponsors came knocking. While many sports teams have only a handful of backers, Angel City has more than 30 famous names, including the next generation of female leaders: Gabrielle Union’s daughter Kaavia Wade and Serena William’s daughter Olympia Ohanian. “We want them to see what’s possible when women come together to build something. You can really affect change,” added Uhrman.

On the corporate side, Angel City is supported by Klarna, Door Dash and Gatorade, as well as women-led shoe brand Birdies. As the team’s exclusive sleeve patch partner, Birdies’ logo will be positioned on the right shoulder of the official kit, appearing on home and away jerseys. Also on the agenda are product collabs, such as the recently launched Game Changer shoe.

Birdies CEO and co-founder Bianca Gates told FN, “They’re a startup and we’re a startup and so there are no real rules. We’re redefining what a partnership like this looks like.” Gates added that the alignment of two women-led organizations was a no brainer, even though Birdies has no ties to the sports world.

What makes this union even more unique is ACFC’s sponsorship model, which requires its corporate partners to reallocate 10% of the value of their sponsorship to local causes, via product, asset or monetary donation. In June 2021, Birdies mobilized part of its allocation to develop a mentorship and paid internship program for young girls across Los Angeles that is ongoing.

“This is more than just saying ‘we’re advocating for women.’ We’re actually doing it,” said Gates. “We have to be the change we want to see, and the more that we can get any industry to focus more on women and be a champion for women, [the better].”

For Uhrman, the partnership allows for greater exposure, as lack of awareness is one of the greatest obstacles for women’s sports.

“Having nontraditional partners, such as Birdies, see women’s sports as an opportunity to speak to their audience, there’s no greater sense of community-building than that,” she said.

For decades, women’s sports have been treated as an after-thought in comparison to men’s leagues. But that changes now, according to experts in the field, as data shows that this untapped market has a high potential for growth.

Angela Ruggiero, co-founder and CEO of The Sports Innovation Lab, a market research company focused on the intersection of sports and technology, said there’s been an awakening on a societal level, but “you can’t build a business without investing in the business first.”

The former Olympian predicted that the market could account for up to a third of the total global sports business if investments start today. But Ruggiero cautioned brands need to invest now with upfront capital and a long-term strategy in order to see those rewards. Otherwise, money is going to be left on the table.

So why invest? Brands who commit early in real ways could reap high levels of loyalty and brand affinity.

Explained Ruggiero, “These consumers are technically-savvy, watching longer, they’re buying more, they have more vested interest in the success and are aligned to the values of those brands and those organizations that stand for women’s sports.”

Nike has seen the rewards firsthand as one of the few brands that is not just sponsoring teams but funding them. In February, the Swoosh became an equity investor in the WNBA as part of the league’s reported $75 million debut funding round. And last year, Nike, a founding partner, announced a long-term
partnership extension with the NWSL, proving its vote of confidence in women’s leagues. According to The Fan Project 2021 Report, a data-driven campaign created by the Sports Innovation Lab, Nike saw more than double the engagement from NWLS fans compared with general sports fans.

Christine Franklin, EVP of marketing at the sports agency Octagon, said, “The reason why it’s so important to talk about the investment [angle in women’s sports] is it is inextricably tied to the opportunities. People who are pushing for the professionalization of women’s sports are focused on investment by brands and third parties because the leagues and the athletes are already investing themselves and time. They can only make money by selling tickets, and that’s not enough anymore.”

The Fan Project Report also found that female athletes often have deeper connections to the fans, so when women’s sports are accessible, the community tunes in at startling rates.

Rosen added, “For years, if not decades, people have been talking about the potential of women’s sports. At some point, we must turn the corner and start covering these athletes and teams. We must drive value for sponsors to encourage more investment, which can then fund more coverage. The bottom line is: Women’s sports are in a good spot, but we have to stop talking about the future and go build it.”